Mickey Brady said: 'Those involved with it have brought huge dismay and great disgrace to Newry' 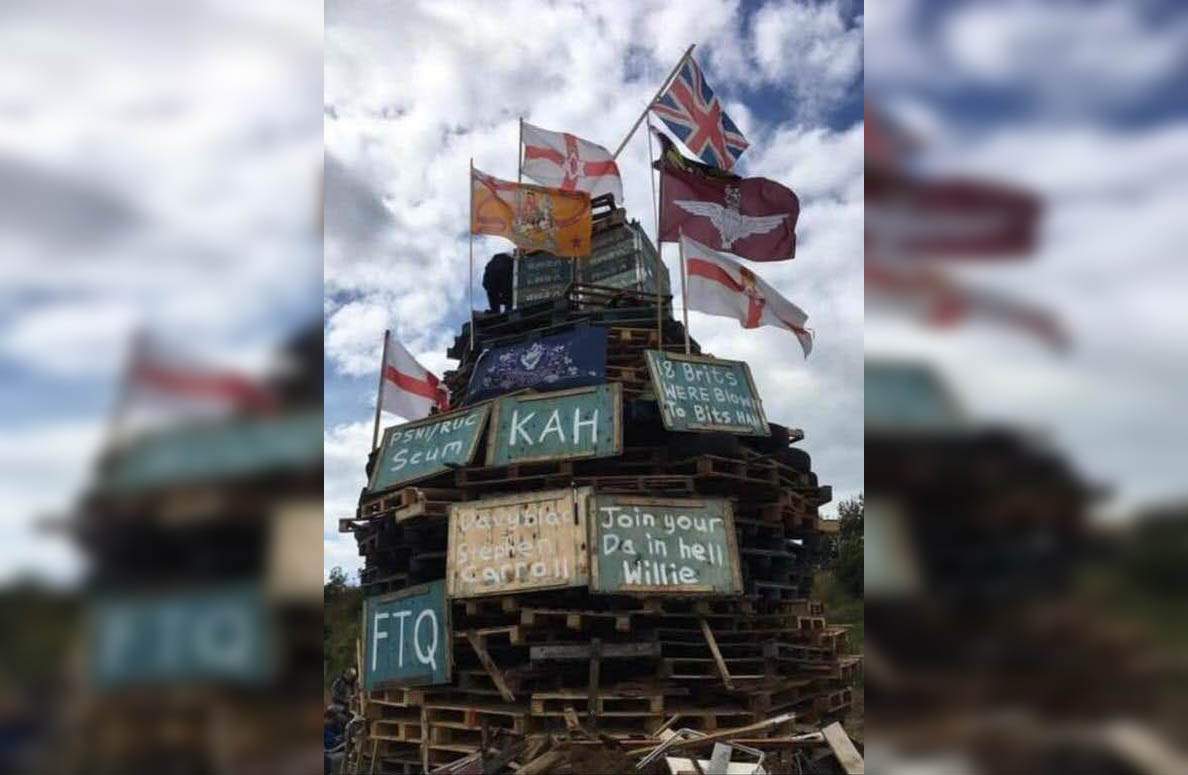 Those responsible for burning flags and slogans – which have been branded a ‘hate crime’ – are “under no circumstances acting in the name of republicanism”, Sinn Fein has said.

“Such actions are hate crimes and must be eradicated,” he said.

“Those involved with it have brought huge dismay and great disgrace to Newry.”

Mr Brady was speaking after the bonfire at Parkhead was reported by Ulster Unionist Councillor David Taylor, who had called on the PSNI to conduct an investigation, branding it a “hate crime”.

In addition to flags placed on the bonfire, a number of placards have also been put on for burning.

One makes a reference to the late Markethill victims’ campaigner, Willie Frazer, which says: “Join your Da in hell Willie.”

Another refers to the killing 0f 18 soldiers in a bomb attack at Narrow Water in August 1979.

Other slogans refer to Prison Officer David Black, gunned down on his way to work in November 2012, and to PSNI Constable Stephen Carroll, from Craigavon, shot dead by the Continuity IRA in March 2009, the first serving member of the PSNI to be killed since the force came into being.

Mr Taylor had called on political representatives to condemn the actions of those responsible.

The Sinn Fein MP, a short time later, added his words of condemnation and said it was the actions of a few.

Said Mr Brady: “Many good community people and residents in Carnagat and Parkhead who have worked hard to bring services to the area and promote all that is positive.

“The vast majority of the community is opposed to bonfire and associated display of hate and anti-social behaviour.”

The Sinn Féin MP stated that those responsible were not acting in the name of republicanism.

He added: “This so called anti-interment bonfire has nothing whatsoever to do with the legacy of internment. It is anti-republican, and does not celebrate any aspect of Irish national identity or cultural traditions.

“Those responsible are under no circumstances acting in the name of republicanism.

“This bonfire is not republican, it is not about politics or culture and simply mirrors the worst elements of loyalism.

“It also has brought further pain and suffering to bereaved families.”