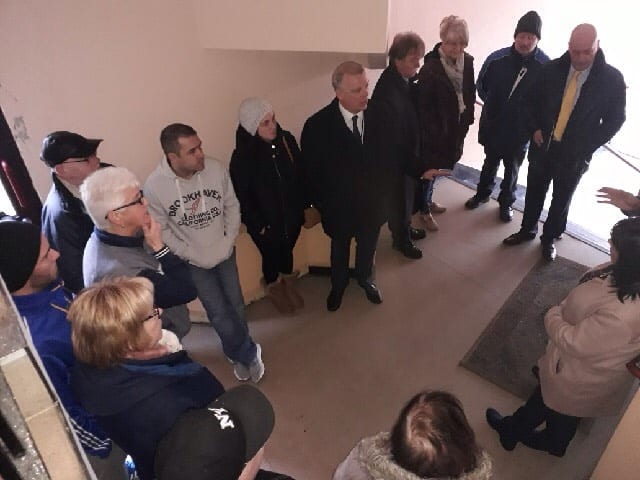 Senior Housing Executive officials have been told to step up to the mark and end the misery of residents of a block of flats in Newry, where conditions have been branded “disgraceful”.

They met with residents of Clare House – at North Street in the city – this week to discuss their growing frustration at a long-running saga.

The meeting had been facilitated by Newry and Armagh MP Mickey Brady, who was accompanied by Sinn Fein Councillors Charlie Casey and Valerie Harte.

Mr Brady said the current living conditions for residents were “totally unacceptable” and it is “now time for decisive action by the Housing Executive to address the situation”.

He praised the residents of the complex for their fortitude in the “long running and totally unacceptable saga”.

“Apart from a small number of individual owner occupied flats, this block is owned and maintained by the Housing Executive,” explained the MP.

“The level of damp and decay in the apartments is appalling and an absolute indictment of the Housing Executive.

“This is a long-running and totally unacceptable saga. The Housing Executive have been fully aware of the issues involved.”

During the meeting, residents outlined once again the conditions they are living in to the regional manager and other Housing Executive officers.

Mr Brady believes the meeting was a worthwhile exercise.

“Myself and my colleagues can’t praise enough the residents of Clare House, who for many years now have faced frustration and dismissal. They have shown great fortitude.

“We felt today that the meeting was constructive, however the Housing Executive are now in no doubt that the time for talking has stopped and that there now needs to be action.

“The residents are entitled to a safe, secure and healthy living environment.”