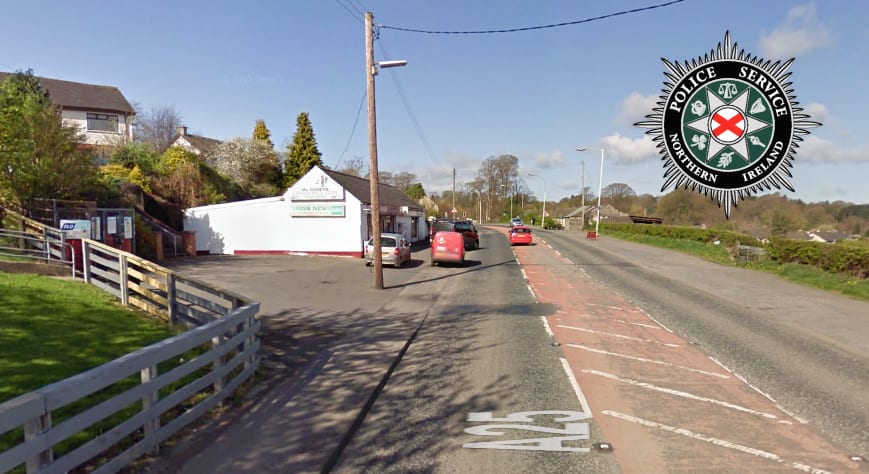 A cash machine was robbed from a petrol station on the Camlough Road in the early hours of this morning (Friday).

The Camlough Road just outside Newry has been closed in both directions due to the incident.

Detectives in Newry are currently investigating the theft of an ATM machine from commercial premises.

Detective Constable Sarah Lyttle said, “It is believed at this stage that heavy machinery was stolen from a building site on the Camlough Road at around 3.30am this morning, and then used to remove an ATM machine from the wall of a filling station nearby.

“The machinery was set on fire following the incident, blocking the road, which remains closed at this time as we carry out our enquiries.

“I would ask anyone who witnessed this incident or who has any information which may assist our investigation to contact detectives in Ardmore on 101 or Crimestoppers anonymously on 0800 555 111.”

“This was a despicable attack on a locally owned business that provides jobs and a crucial service to the community,” he said.

“The theft of the shop’s cash machine is particularly loathsome as these machines provide a vital service to people in rural areas, especially people with limited mobility or access to transport.
“In addition to the destruction caused to Gregory’s shop the digger they used to carry out this attack was stolen from a local building site and then set on fire outside St Paul’s school, dealing a huge financial blow to yet another local business.
“It takes an absolutely craven mentality to set a vehicle on fire outside a school. thankfully nobody was hurt but their actions have caused the closure of a particularly busy stretch of road at its busiest time, stopping people getting to work and, crucially, children getting to school.
“These thugs have no respect or regard for this area or its people.  Crimes like this are an assault on the entire community and as such the entire community must unite to face these parasites down.
“If anyone witnessed any suspicious behaviour last night or indeed anything of note in the area of the Camlough Road I would urge them to contact the PSNI as soon as possible and help get these criminals off the backs of our communities.”

@Larold2202 The A25 is closed Camlough to Newry.Diversions are in place and the bus may be delayed ^JC

School as normal this morning, however it may take a little longer to commence as Camlough to St Paul’s road closed. Please use alternative. — St Pauls High School (@stpaulsbbrook) November 6, 2015

The Camlough Rd in Newry has been closed in both directions due to an ongoing incident. Diversions are in place but delays expected.