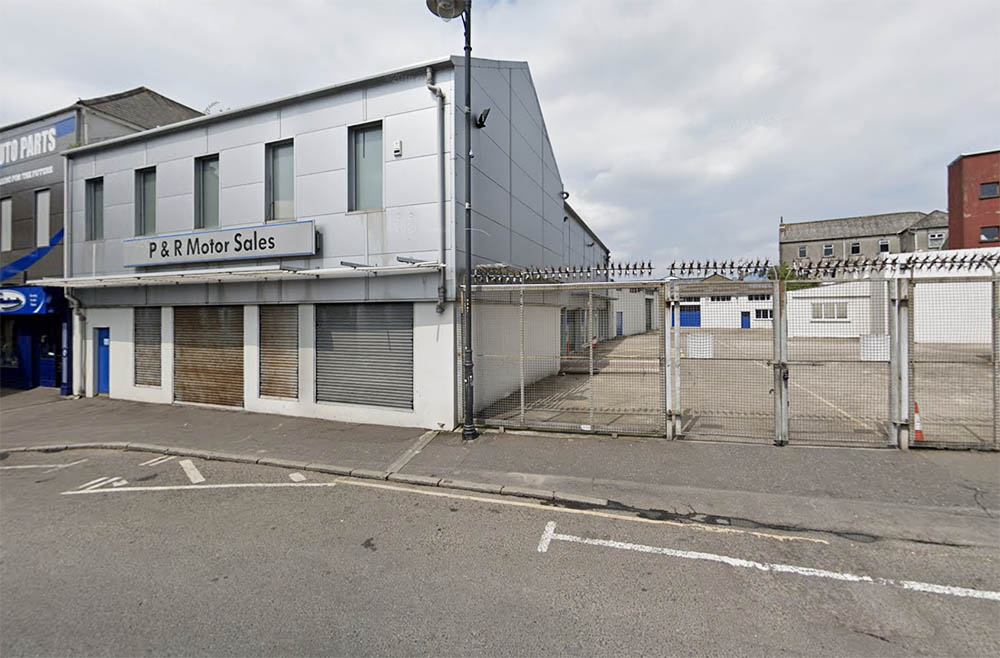 Plans have been drawn up for a multi-million pounds four-storey shops and apartments development in the heart of Newry city centre.

The scheme would centre on the junction of Merchants Quay and Canal Street, on the site of the former P&R Motor Sales business.

It would see the demolition of existing buildings on site.

And in their place would be built a mixed-use development.

It would comprise three retail units at ground floor level, stretching to close to 3,000 sq ft.

And upper levels would consist of new apartments – 35 in total – complete with car parking and cycle storage facilities.

Proposals – in the name of Kelly Brothers Ltd – have been submitted to Newry, Mourne and Down District Council for consideration.

The site comprises the buildings and yard associated with the former P&R Motor Sales business. The buildings were once operated as a car showroom with associated servicing garage and ancillary offices whilst the yard areas were used as the showroom forecourt, customer parking and car washing area.

Following the closure of the car garage the front section of the building was occupied as office space.

The proposals would bring the entire site into productive use.

According to papers submitted with the application, the site will be completely cleared to make way for a “high quality development”.

It adds: “The scheme has been designed as a single building which will create a strong frontage on to Merchant’s Quay, actively turning the corner onto Canal Street.”

Two of the units will be accesses via Merchant’s Quay, the third occupies the corner location.

The submission reveals: “Residential units are proposed to occupy the first to third floors of the building.

“The apartments are proposed to be accessed from both Merchants Quay and Canal Street and provide access to a lift and stair core to access the upper floors.

“Vehicular access is proposed to be taken from Merchant’s Quay from the same location as the existing access in an undercroft arrangement.

“Parking to serve the residential accommodation is provided internally within the site at ground floor level and makes provision for 30 car parking spaces.

“Communal amenity space is provided in the form of a grassed area along the northern boundary of the site and in an outdoor decked amenity area at first floor level. Landscaping is also proposed along the western and eastern boundaries of the site which will help to soften the internal arrangement.

“The building is proposed to extend to four storeys in height with a traditional pitched roof form. Accommodation is provided in the roof void through dormers, a design feature which is prevalent in the Conservation Area and notably along Canal Street.”

The application is now with council and a decision is expected in due course.