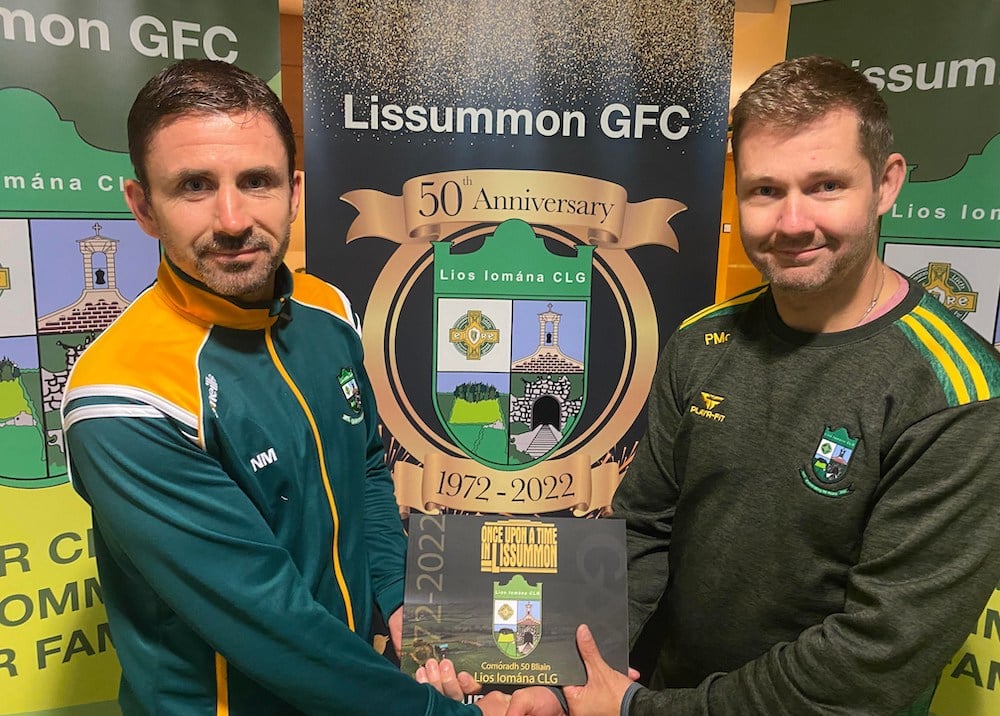 As the celebrations continue for Lissummon GFC for its 50th anniversary year, the icing on the cake has been the success of the senior men’s team in reaching the Junior Football Championship final taking place on Sunday, October 9 in the Athletic Grounds, Armagh.

Club Chairman Paul McCaffery has had a busy year hosting numerous events to mark and celebrate the club’s milestone year.

Delighted to see the men’s team through to the county final Paul commented: “I am deeply honoured and proud to be chairman of the club for this historic year. I am so proud of our senior team reaching this year’s final. It has been 18 years since we got there and won in 2004. On behalf of the committee I wish the team and management all the very best and encourage all supporters to make the journey to Armagh sporting their team colours this
weekend.

“The buzz and excitement around the club and community is heartening. The support from members and local businesses over the past year during our 50th celebrations has been tremendous and they again are so helpful and loyal in the lead up to the final. I want to personally offer my sincere appreciation to our main sponsors, local businesses, members and the community as a whole for their invaluable and continued support,” he said.

As part of its celebrations the club will be hosting an ‘Up for the Match’ event prior to the county final to coincide with the launch of a new historic book entitled ‘Once Upon a Time In Lissummon’ on Friday, October 7 from 7.30pm in the club. Everyone is welcome to attend.

‘Once Upon A Time…’ was penned by local man Niall Murtagh. He describes what inspired him to go back in time.

“The 50 years anniversary is a huge thing for everyone involved with the club. We on the committee have been batting ideas back and forward about how we could mark the occasion since summer 2021. We have already had a series of really well attended events over the year. “However, once an event is over, it’s gone and it’s good to have something tangible that people can hold on to as a souvenir and have a flick through every now and then as the years roll on.

“Producing books for key milestones in the club is something of a family tradition. My father wrote a book for the opening of Lissummon football pitch back in 1992 and another for our 25th Anniversary in 1997, so I suppose there is a bit of a sense of duty there to help keep the thing going.”

The crammed book, spanning all 50 years, takes the reader on a trip down memory lane, through the lean times of the early years, improved team fortunes, opening of pitches and new club facilities and key successes in men’s, ladies and underage football.

A chapter also pays a tribute to club stalwarts, many sadly no longer with us, and another takes a run through key
events and highlights for the club and the community more generally.

Niall added: “Unfortunately, a 50th yearbook has to be published in the 50th year and it’s a slow process, so regrettably there is nothing about our current run to a county final and hopefully winning a second title. That’s a regret, but maybe a second edition can be pursued.”