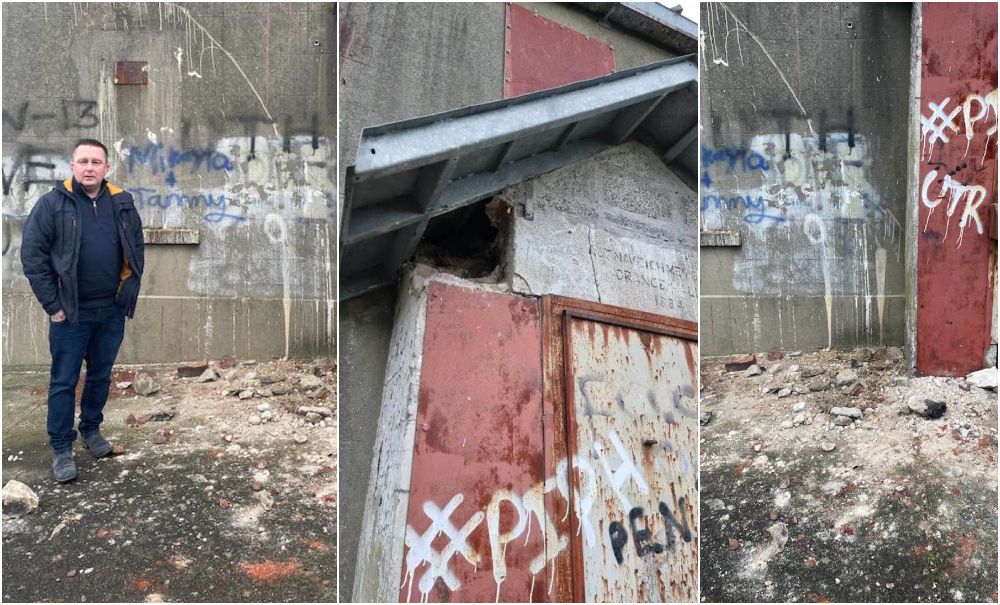 The latest attack on an besieged Orange Hall in Newry has been described as “extremely depressing”.

Ulster Unionist Councillor David Taylor visited the Altnaveigh Orange Hall on Saturday morning following another overnight attack on a building which for years, has resembled a derelict property such is the lengths its members have to go to protect it from damage.

Councillor Taylor said he was there to offer support to the Brethren of LOL 37.

“As you can see from the pictures displaying various pieces of graffiti and damage to the building, attacks on Altnaveigh Orange Hall are an all too regular occurrence,” he explained.

“This latest incident highlights that there are those within the community who remain intolerant of the continued physical presence of Orange and Protestant culture in the Newry area.

“It is extremely depressing that the Altnaveigh Orange Brethren endure relentless incidents of damage being caused to their Hall – they pose no threat to anybody and the hall plays an important role each year in hosting a service to remember the six protestants who were murdered by the IRA in the 1922 incident known as the Altnaveigh Massacre.

“As part of the police investigation, myself and lodge members have asked this latest incident to be treated as a hate crime.

“Local community and political leaders must also step up to the mark in preventing continued damage being caused to the hall.”

Police are investigating a report of criminal damage at an Orange Hall on Martins Lane, Newry.

Inspector Macdonald said: “A report was received at around 11.15 am on Saturday morning, January 21 that damage was caused to a doorway and graffiti had been sprayed on the walls.

“Enquiries into the incident, which is being treated as a sectarian hate crime, are ongoing, and anyone who may have witnessed any suspicious activity in the area, or who has any information which could assist, is asked to contact police in Newry on 101, quoting reference number 688 21/01/23.”

A report can also be made using the online reporting form via www.psni.police.uk/makeareport. Alternatively, information can be provided to Crimestoppers anonymously on 0800 555 111 or online at www.crimestoppers-uk.org.

Sinn Féin MLA Liz Kimmins has also condemned the attack on Altnaveigh Orange Hall.
The Newry and Armagh MLA said: “I unreservedly condemn the attack on the Orange Hall in Altnaveigh. Those responsible do not represent the community.
“I would appeal to anyone with information about this vandalism to report it to the PSNI.”