John - who has raised £1.7m over the past 28 years - said: 'I have decided that while I am fit enough to continue with my work for the Hospice that’s exactly what I’m going to do!' 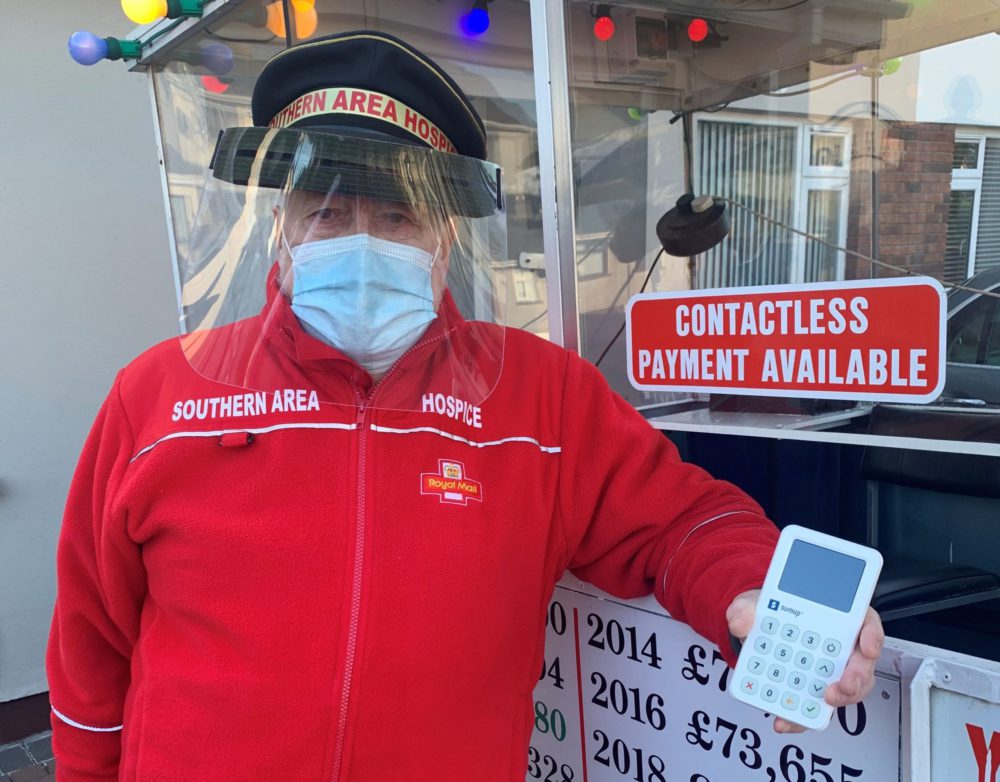 He’s as big a part of Christmas as Santa and mince pies and it would take more than a pandemic to stop 79-year-old John Dalzell from completing his annual festive fundraiser for the Southern Area Hospice Services.

For over 28 years he has dedicated one whole week to sitting out and collecting money for in the run-up to Christmas – usually in the coldest weather when almost everyone else is buying and wrapping presents.

He has now gathered a whole team to assist him – known as the ‘Sit-Out Team’ – and together they collect every Christmas across Newry, while John retains his usual spot in his famous trailer on Hill Street, Newry. Back in 2016, John, who was almost 76 years old at the time, said it would be his last year completing the Sit-Out as he was not as “able” as he used to be.

But he had planned for this, and his team would continue with their fundraising on his behalf.

John has been a part of Christmas in the Hospice for so long it was almost impossible to think of it without him in his red suit on Hill Street.

He has since decided that he would like to continue his work.

Said John: “I know I’m not as young as I used to be, but who is?  So, I have decided that while I am fit enough to continue with my work for the Hospice that’s exactly what I’m going to do!

“Last year we raised over £85,000 and I know the Hospice really needs that money to look after the patients and that’s all I need to motivate me to keep going until I really can’t and thankfully that’s not this year .

“We have been raising money together for the Hospice for so long and I really want to thank you all – over £1.7million…  that is a lot of money to have donated. I am so proud and I hope you all are too. Thank you all for making my Sit-Out the success it is today”.

John’s 29th consecutive Sit-Out will take place at its usual spot in Marcus Square on Hill Street, Newry where his familiar trailer will be stationed from December 12 to 24, from 8am until 5pm each day.

He has put extra precautions in place this year, such as putting extra Perspex on the trailer and obtaining a contactless card machine.

Fundraising Officer for the Hospice James McCaffrey, who works with John and his team, said: “I have known John for a few years now and it is no surprise to me that he has decided to continue with his wonderful Sit-Out for yet another year. #

“John and his dedicated Sit-Out team are an incredible example of the spirit of giving at Christmas. The amount of time and effort that they put into this collection for the Hospice each year is truly amazing, and it is an honour to work alongside them.

“To date John has raised a staggering £1.7million for our cause. On behalf of all of the patients and their families and friends who have been touched by our services in the past 29 years of Hospice care I would like to sincerely thank John and his team, and everyone who continues to support them.

“Although the Sit-Out takes place from the 12th-24th December, John works all year round to ensure it happens and this year more than ever, he has overcome extra obstacles so that we don’t lose out on the substantial amount he raises.”

As well as John’s Sit-Out on Hill Street, collections will take place around the city at Fiveways Shopping Complex, The Quays Shopping Centre and B&Q, so please keep an eye out for them when you are in town.

John also loves a bit of “craic” and company to keep him warm on Hill Street so do not be a stranger if you are passing by!

He often reminisces on the hundreds of children that he took to school on his bus and delights when they approach him at the trailer now as adults with fond memories of his kindness.

If you would like to make a donation to this Appeal in aid of Southern Area Hospice Services please visit John’s Sit Out on Hill Street, make a donation to one of his collectors around the town or send your donation to: SOUTHERN AREA HOSPICE SERVICES, ST JOHN’S HOUSE, COURTNEY HILL, NEWRY, BT34 2EB. Donations can also be made over the phone by calling James on (028) 3026 7711.