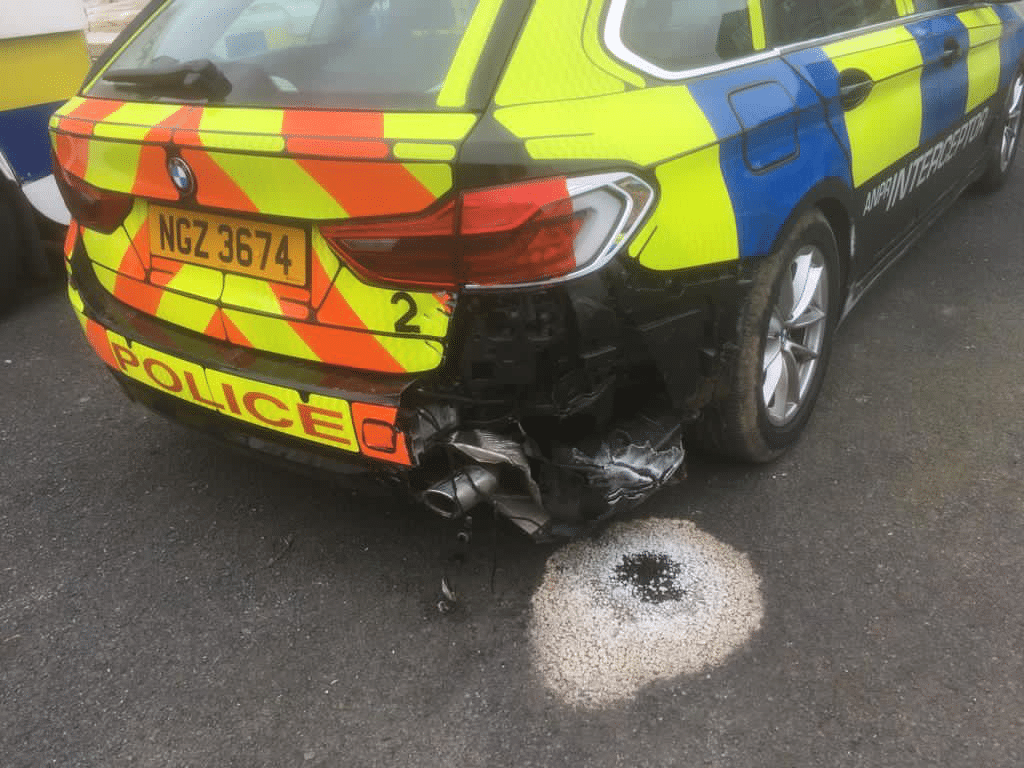 Police have released pictures of the damage sustained as they appeal for help to find the driver of a car who rammed police vehicles and left an officer injured after failing to stop.

The incident happened in Newry on Friday night.

At 8.10pm, officers from the Automatic Number Plate Recognition (ANPR) Intercept Team were alerted to a vehicle travelling southbound on the A1, Newry Road.

When the vehicle, a Volkswagen Passat, failed to stop for police, there was a pursuit.

The driver of the vehicle subsequently forced the police vehicle off the road. It vehicle sustained substantial damage, while an officer sustained a leg injury.

Two other police vehicles who responded to the incident were also damaged when officers attempted to stop the offending vehicle from leaving the scene.

The driver of the offending vehicle made off and his whereabouts is unknown.

A section of the A1 was closed for a period of time as officers dealt with the scene. Superintendent Norman Haslett said: “One of our officers has been injured as a result of the reckless actions of the driver who made off from the scene.

“We have also had to take two of our vehicles off the road so they can be examined for road worthiness, which affects our service delivery.

“There is also the impact in terms of our officers and their welfare, as well as the cost of repairs to the vehicle. “I would appeal to anyone who can assist our investigation or help us locate the driver who made off from the scene to call us on 101, and quote reference number 2088 of 19/03/21.”

A report can also be made using the online reporting form via www.psni.police.uk/makeareport. Alternatively, information can be provided to Crimestoppers anonymously on 0800 555 111 or online at www.crimestoppers-uk.org