Controversial plans for huge £62.5m retail park at Newry to be recommended for refusal this week 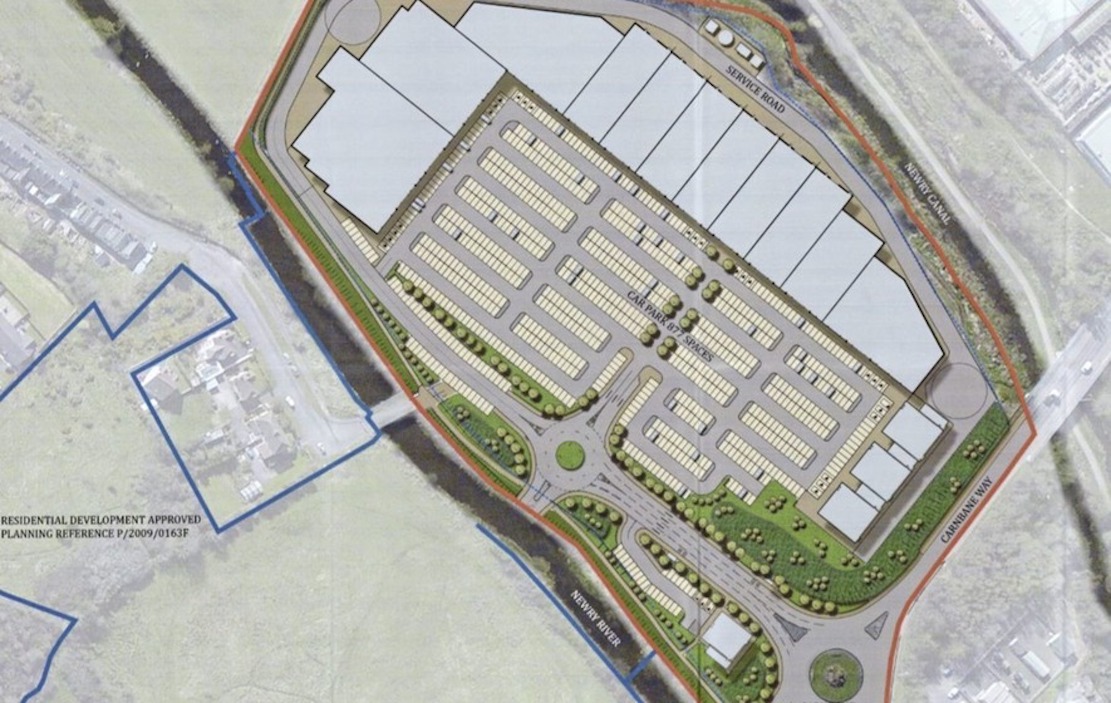 Controversial plans for a massive new retail park at Newry – which would cost £62.5 million to build and create hundreds of jobs – are to be recommended for refusal this week.

The proposals – submitted in the name of Damolly Developments back in March 2017 – had been earmarked for the site of the former HMRC custom house and clearance station at Carnbane Way.

Independent retailers body Retail NI has been vehement in its opposition and insisted it is “completely unsustainable and will have a significant detrimental impact on Newry City Centre and the wider region”.

Describing it as “one of the largest retail proposals in Northern Ireland”, Retail NI chief executive Glyn Roberts, in his lengthy submission, added: “The proposal is completely unrealistic, illogical and highly speculative in nature.”

But the developer, in statements on its behalf to Newry, Mourne and Down District Council, had argued it would be of great benefit to the area.

To be known as the Newry City Retail Park, the proposals had included a total of 11 retail units along with four restaurants and cafes.

The gross retail floor space would stretch to close to 13,000 sq metres, with units varying in size from 991 sq metres up to 2,830 sq metres.

According to an earlier economic impact assessment, the development would offer improved choice in the area.

It said that “all prospective retailers being accommodated within the proposed stores will be new to the area”.

And it added: “The Newry City Retail Park is intended to be one part of a wider investment scheme, which includes housing, business incubation space and a food superstore.”

It said the scheme has the “potential to create and sustain a high number of jobs in the Newry area”.

It was estimated hundreds of jobs would be created upon completion.

And during the construction phases, the developer had indicated the equivalent of “840 job years”, with in excess of £47 million benefit to the local economy.

It was “not expected to have an adverse impact on the vitality and viability of any existing town centres within the defined catchment area based on the findings of a retail impact assessment conducted by MBA Planning”.

It would instead, according to the submission, “deliver substantive local economic benefits”.

Papers submitted with the application revealed that 13 sites in total were vetted for such a retail park, including other areas within Newry, as well as locations in Markethill, Newtownhamilton and Omeath.

It was judged that 11 of these were “too small to accommodate the proposed retail park”, while the remaining two, which would have been of sufficient size, were not available.

The application had been brought with an opinion to refuse in October and subsequently deferred to consider late objections.

It was to go back to committee in November but acting on legal advice was withdrawn from the agenda.

Among the grounds for objection were the “scale and form of the development, the unrestricted nature of the retail proposal, and the impact on existing centres including Newry City Centre and Banbridge, due to the potential to attract traditional high street/discount retailers, the accessible site location at Carnbane, diversion of existing city centre retailers, competition with existing retailers and job displacement, and contrary to current planning policy and flawed RIA”.

Planners will now return the application for consideration at this Wednesday’s sitting of Newry, Mourne and Down District Council’s planning committee.

And the opinion to committee – which will have to consider all the fresh materials and decide whether or not to endorse the recommendation – is that the site “remains unacceptable and should be refused”.