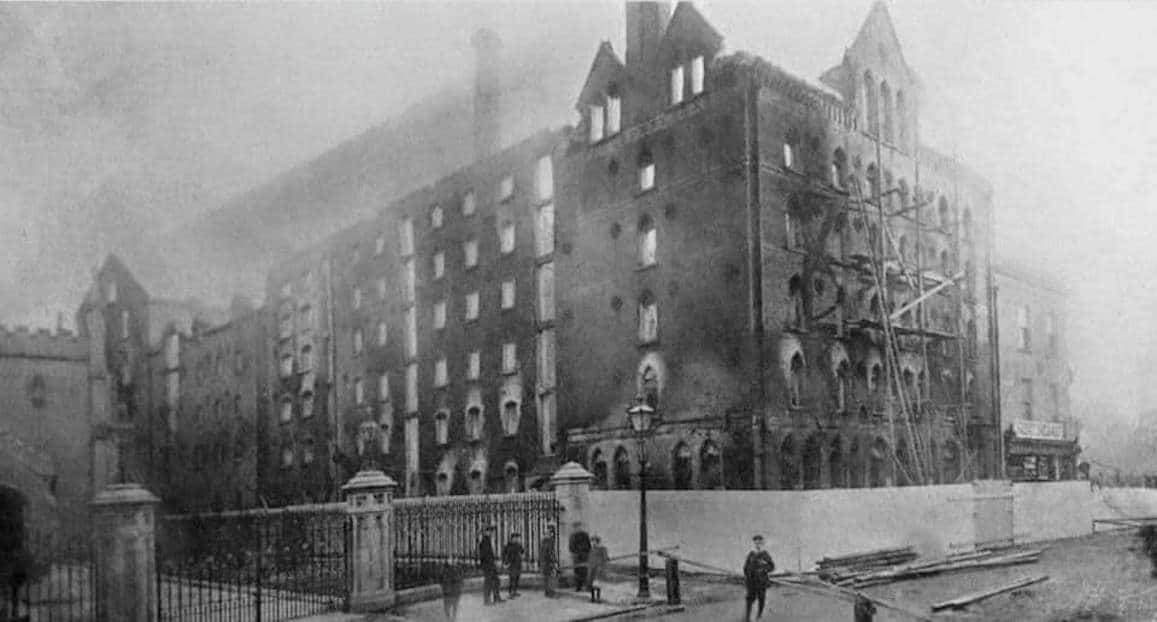 There have been calls to immortalise a Newry firefighter who lost his life protecting the city’s Cathedral against an almighty blaze in December 1910.

Newry historian John McCabe, since 2016, has been advancing the proposal for a public acknowledgement of gratitude in the form of a memorial to the gallantry of a fireman who perished in a mill fire whilst protecting Newry and its Cathedral just over 111 years ago.

There once stood a great building beside Newry Cathedral, known as A.R. Walker’s mill, erected about 1880 and built on the former site of Robert McClelland’s blacksmith’s forge.

Bounded by Mill Street and Lower Water Street, (main image) it shows the Hill Street frontage with the Cathedral on the left, as well as the damage caused by fire on December 8, 1910 when it was occupied by Robert Sands’ grain store and the print works of the Newry Reporter newspaper.

On the subject of the fire itself the alarm was raised just after 3am when the print room was found full of smoke.

The fire brigade turned out, but a fire of this scale, fanned by a strong wind, was beyond their resources.

The press reported that ‘their efforts were absolutely useless’. Added to this, low water pressure rendered their hoses ineffectual above ground floor. By 6am the conflagration was at its highest and the scarlet glow could be seen from Kilkeel, Rathfriland and Newtownhamilton.

Another report on the fire read: “One of the most disastrous fires in the history of Newry occurred early on Thursday morning resulting in the complete destruction of an extensive block of buildings running from Lower Water Street to Mill Street and abutting on Hill Street which included the large Oatmeal Mill and Grain Stores belonging to Messrs Henry Thompson and Co. and the premises of the Newry Reporter belonging to Mr. Joseph Wright.

“Between three and four o’clock when the machine-men employed in the printing office were engaged in working off the issue of the newspaper, the room suddenly filled with smoke and investigation showed that a fire was in progress in Mr. Sands Mill.

“The Brigade soon turned out but owing to the strong wind that prevailed it was impossible to check the fire with the result that nothing but the bare walls of all the premises and a mass of debris remain.

“The adjoining premises of Mr. MacMillan Watchmaker were considerably damaged by water, and a store belonging to Mr. Joseph Irwin at the rear of his statutory warehouse was destroyed.

“The rear of the cycle shop of Mr. Hutchinson in Mill Street also suffered damage. So great was the fire that it illuminated the whole district. The windows of Newry Cathedral which lie to the right of the Reporter Office were damaged; also several houses on the opposite side of the street were also damaged.

“Sparks from the fire ignited the roof of the Provincial Bank and it was only with great difficulty that the conflagration was exhausted.”

In a foolhardy attempt to assess the fire, Brigade Captain R.F. Maginnis took Fireman James Fegan into the building at an early stage, but was called away, leaving Fegan to his fate under falling beams and machinery.

He was the only causality, who left a widow and five children. Most of the shell of the building was later demolished, although part of it was incorporated into a garden attached to the Cathedral.

The Newry Reporter went out of publication after the fire, until March 1911. In the days after the fire the search continued for James Fegan as reads: “On Saturday evening the melancholy task of searching for the missing Fireman Fegan was begun under the dull and dismal weather conditions and in the presence of many spectators, who however were kept back without the barriers that mark the danger zone.

“The search which proved fruitless, and was continued on Monday with the same results, was begun at the gate entrance in Water Street of the ‘Reporter’ offices, but owing to the intense heat of the burning debris and the difficulties inseparable from fallen beams, machinery, etc little progress could be made in the work.

“It is the general opinion that little, if any, will be found of the remains of the unfortunate man, who was a veteran in the ranks of the brigade, and well experienced in the work which finally it is feared claimed him as a victim.

“It is rather a coincidence too, that at a big firm in the premises now occupied by Messrs. Cahill Bros. in Hill Street, about 14 or 15 years ago, Fegan narrowly escaped with his life then being carried out senseless from the premises on that occasion by Mr. James Heather and others.”

John McCabe was to later learn that the remains of James Fegan were to be eventually found, and at an inquest, it was revealed they consisted of some calcined bones believed to be those of the fireman; near his bones were found a hatchet, hose key, and a door key identified to belonging to the deceased.

So ends this dramatic part of Newry history and it would be nice if some form of a memorial, a small plaque or tree could be incorporated into the Newry Cathedral garden at the location where James Fegan lost his life protecting Newry and its Cathedral from greater disaster by fire. John, in continuing his research, revealed in the 1911 Census – the year after James’s death – that his widow Rose Ann Fegan aged 55 was still living at No.3 Nicholsons Court, Newry with her five children. They were Minnie Fegan (24) Mill Worker; James Fegan (23) Machinist; Patrick Fegan (21); Charles Fegan (17) and Annie E. Fegan (12).

Mr McCabe commented: “I am very keen to hear from the descendants of the Fegan family to hopefully learn more about James Fegan and include them in future plans. I also have contacted the local administration of Newry Cathedral, Northern Ireland Fire & Rescue Service and other interested bodies to explore the best way forward to make this memorial come to fruition.”