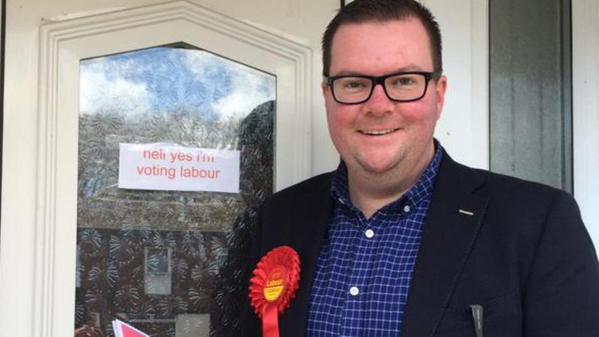 A former south Armagh man, who was elected as a Labour MP at last month’s Westminster election, has spoken of his pride in his native county during his maiden speech to the House of Commons.

Conor McGinn, a former student of St Paul’s High School in Bessbrook, won a majority vote of 26,378 for the St Helen’s North constituency on Merseyside.

Mr McGinn, the son of former Newry and Mourne Mayor Pat McGinn, declared it a “Labour borough” in his victory speech.

Succeeding Dave Watts, after 39 years, the south Armagh man, in his first speech as a Member of Parliament, spoke of the huge honour.

He described his constituency of St Helen’s North as one having “a distinguished history and great potential for the future”, but he said he feared “that things will not be easy in the time ahead”.

Mr McGinn said: “I know that many of my constituents are worried about what lies ahead for them and their families. I can only assure them that I will fight every day for our community, championing jobs and investment, standing up for the most vulnerable, and always defending the interests of our area.”

Showing the utmost pride in his roots, he turned to the Deputy Speaker and said he did not wish to confuse the House with his accent.

“I can see from the puzzled look on some faces that there is bewilderment at this strange St Helen’s accent, which sounds remarkably like the dulcet Ulster tones that are more associated with Northern Ireland Members.

“There is a song called ‘The Boys from the County Armagh’, which contains the lines

“‘My heart is at home in old Ireland,

“‘In the County of Armagh’.

“I am one of those boys, and mine is, but if I might be allowed a somewhat metaphysical addition to the lyrics, I would say that my heart, along with my head and my feet, is also at home in the north-west of England, in the constituency of St Helen’s North.

“If we are to describe generations as children of a seminal figure or defining events, I am most certainly a child of the peace process.

“The changed relationship between Britain and Ireland, and the end of the terrible conflict that caused so much pain to the peoples of these islands, have afforded me opportunities that were denied to many who came before me.

“I am in debt to all in the House and outside it who have, through their sacrifice, courage and leadership over many years, helped to build peace and reconciliation in Northern Ireland.

“I do not wish to disrupt the etiquette of the House, but I hope that I may be allowed to call them all my honourable friends. “Where previously there were suspicion and mistrust, today there are friendship and co-operation between the United Kingdom and Ireland.

“There is no longer any contradiction in being Irish and British, and having feelings of loyalty and affinity to both countries. The contribution made by the Irish in Britain to society here has helped to make that possible. It is valued and respected, and has helped to make this the great nation that it is.

“I hope that, in keeping with that tradition, I can make my own contribution through membership of the House of Commons.”