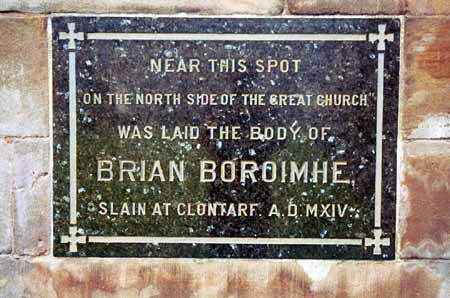 A £20,000 sculpture of Brian Boru, the only undisputed High King of Ireland, is to be erected in Armagh City, Armagh I can reveal.

Armagh City and District Council has today (Thursday) gone out to tender to find an artist to create the piece.

This year marks the 1000th anniversary of Boru’s death at the Battle of Clontarf on Good Friday in 1014.

And the council wants to mark the occasion with a lasting memorial in the form of the ‘Brian Boru Legacy Sculpture’.

It is an issue which has been talked about for some time, but there has been disagreement between councillors over where exactly the sculpture should be located.

But in a bid to have the work in place as the millennial anniversary draws to a close, the council has now advertised for “artists, or suitably qualified/experienced practitioners/contractors for the creation of a new Brian Boru legacy artwork”.

Two possible sites have been identified and they are both within the shadow of St Patrick’s Church of Ireland Cathedral, within the grounds of which Boru is buried and for which a plaque (pictured) is the only tangible identification of that historic fact.

One of the sites is on a raised flower bed, near the entrance of the Cathedral on the east side, overlooking Market Street. The other is within the Cathedral’s walled gardens.

The total fee for the sculpture, which is described as a “single stage public art commission”, is £20,000 and, as such, does not cover the artist’s preparation of proposals.

A strict closing date for tenders has been given as midday on Tuesday, October 7.

The commission of the Boru legacy comes just over two months after the hugely popular and poignant sculpture marking the 125th anniversary of the Armagh Railway Disaster was unveiled on the Mall.

This new sculpture will form a lasting memorial to Boru and his influence in these parts and comes during a year-long, island-wide recognition of the 1000th anniversary of his death.

To commemorate the Battle of Clontarf, representatives from Counties Clare, Tipperary, Dublin and Armagh recently attended the Irish Fest in Milwaukee, in a bid to attract some of the 150,000 annual visitors to the US festival to come to Ireland.

Among those taking part from Armagh were the Armagh Rhymers, Armagh Pipers’ Club and Living History characters from the Navan Centre.