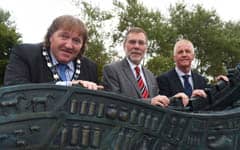 The works in the city included upgrading and extending of footpaths; increased and improved lighting provision; under grounding of overhead services; new railings, additional street furniture and trees throughout the area.

Speaking at the opening, the Minister said: “Newry’s quays have been transformed through a well designed and delivered public realm scheme. This major investment by the Northern Ireland Executive, in conjunction with Newry and Mourne District Council, has complemented previously completed schemes in Hill Street and Monaghan Street and connected the city centre by raising the quality of the environment.

“The historic Merchant’s Quay has been enhanced and linkages have been created through a high specification boulevard where people can walk, relax and enjoy the two waterways flowing through the city.

“An open space has been created that is unique and a valuable asset that will attract visitors, reinvigorate the local economy and encourage private sector investment.”

The Minister added: “This investment in Newry is a fundamental part of our strategy to deliver economic regeneration to our town and city centres, and the Northern Ireland Executive’s continued commitment to the delivery of actions outlined in the Newry Masterplan.”

Mayor of Newry and Mourne District Council Councillor Dáire Hughes said: “The delivery of this scheme represents a significant investment in Newry’s Waterfront as highlighted within the Newry City Centre Masterplan and has given a further boost to the rejuvenation of Newry’s historic canal. Council in partnership with others will continue to encourage further regeneration investment right across the district in the years ahead.”

The total cost of the Newry Linkages Public Realm scheme was £2.467million. This was funded by contributions of up to £2.03million from the Department for Social Development and £437,000 from Newry and Mourne District Council.