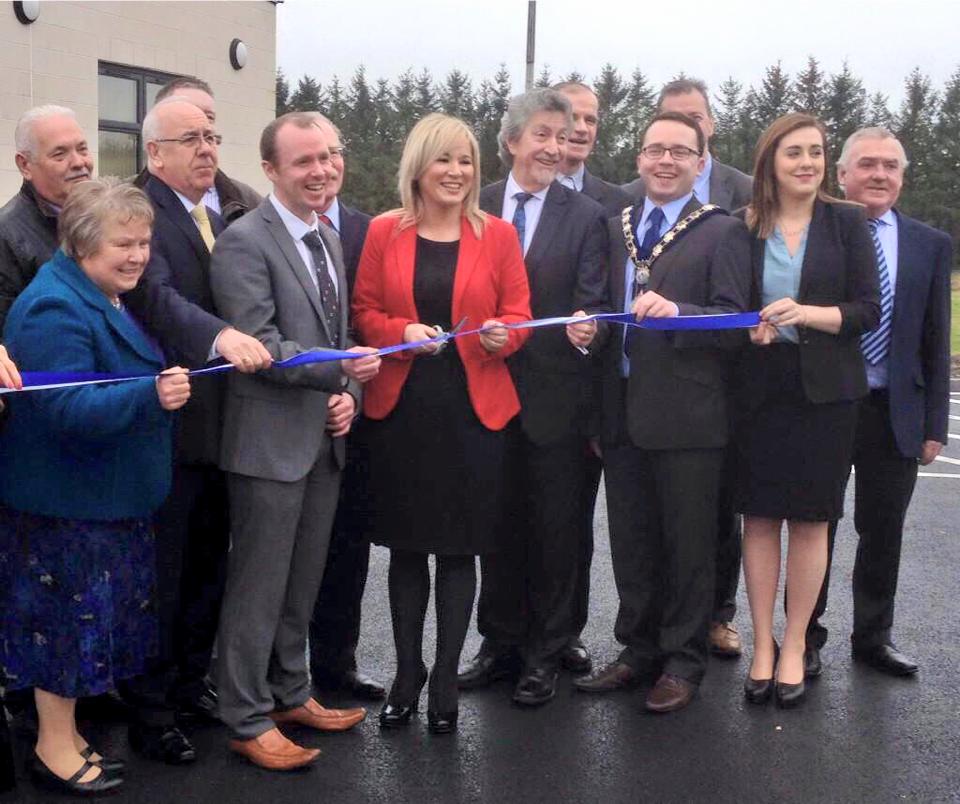 A new £1million community centre has been officially opened in Culloville today.

The county Armagh centre, funded by Southern Organisation for Action in Rural Areas (SOAR), has been hailed as an exciting project

Speaking at the launch, the Minister of Agriculture and Rural Development Michelle O’Neill, said: “I congratulate Culloville Development Association and Newry and Mourne District Council on completion of this project. It is particularly positive to see the tangible benefits and outcomes for rural communities that my Departments Rural Development Programme brings.

“The project was funded under the Basic Services Measure of the Rural Development Programme which aims to improve or maintain the living conditions and welfare of those living in rural areas, and to increase the attractiveness of such areas through provision of more and better basic services, for the economy and the rural population. I think we can all agree that with this project, those aims have certainly been achieved.”

The project was supported, both financially and administratively, by Newry and Mourne District Council.

Mayor Daire Hughes commended the work in particular of the Culloville Development Association who had the foresight to develop such an exciting project and to Councillors and officials within the Slieve Gullion area who guided, advised and lobbied for them throughout the process.

Gerard Callan, Chairperson of Culloville Development Association, said: “The completion of the construction of the Community Centre represents the culmination of a lot of hard work from a committed group of people who were determined to see this project happening. I would like the thank the four voluntary groups in the Culloville area who contributed greatly to the project namely Culloville GAC, Culloville Residents Association, St Malachys Youth Club and Culloville Camogie Club. We also would like to thank all the funders including SOAR, DARD and Newry and Mourne District Council for their support in getting the project to this stage. The support of local councillors is also much appreciated by the Development Association.”

The construction of the Community Centre represents the second project undertaken by Culloville Development Association. The first project also funded by SOAR included the completion of a new community walkway facility, lighting and perimeter fencing.

Mr Callan also remarked: “The people of Culloville are really excited with the opening of the Community Centre and we hope that these investments will give every person in the area the opportunity to avail of the very best in Community facilities into the future.”

Cllr. Terry Hearty added: “I want to congratulate the four groups involved in the Culloville Development Association for the absolute mammoth effort they have put in to making this facility a reality,” he said.

“Their hard work, commitment and perseverance was monumental and should serve as an inspiration to community groups right across Ireland as to what can be achieved when people work together.

“It was a pleasure working with them. No task was too big or too small for anyone to do, everybody rolled up their sleeves and got stuck in and today they’re seeing the fruits of that labour.

“The new centre is a fantastic facility and something the entire area can be proud of. It’s something the association will be delighted to show off and I’m sure they’ll be inviting people from right across south Armagh, Louth and Monaghan to come out and enjoy the various activities and entertainment that will be on offer.

“There was only one thing that cast a shadow over the celebrations today and that was that Anne McGeeney, who passed away last year, was missing.