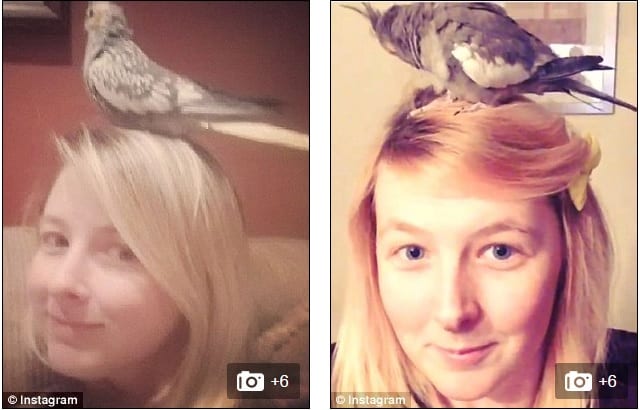 A young Armagh woman got the shock of her life when she was contacted by a Trans-Atlantic doppleganger!

They say that everyone’s got a double and, for 24-year-old Naomi Dynes, that certainly is true.

Naomi was contacted via Instagram when American Melissa Tanner left a comment on a picture the young Armagh woman had taken of herself posing with her cockatiel on her head.

Tanner, from Baltimore, in the US state of Maryland, had been browsing her Instagram one day for pictures under #cockatiel when she happened on the snap.

And what she found took her breath away.

When she discovered the picture of Naomi with a cockatiel on her head she initially thought it was herself.

Thirty-four-year-old Melissa told the Baltimore Sun: “I see what I actually thought was myself. I was like, ‘Why am I wearing this? I don’t remember taking this picture’.

“It was sort of a very strange out-of-body experience. What am I looking at?” She left the message for Naomi, commenting about the cockatiel, to see if the Armagh woman made reference to the uncanny resemblance.

She did! When Naomi saw who it was from, she too thought she was looking at a picture of herself.

They also hope to meet up too in the not too distant future, when Melissa travels to Ireland to visit a friend.

Naomi admits to being “in shock” at the similarities.

Not only are they the spitting image of each other – and both own cockatiels – they are both keen on running and have a background in psychology.

It just goes to show – the world truly is a small – but weird and wonderful place!