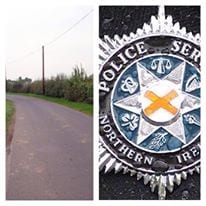 The elderly couple who were targeted by a robber in their own home last night have been assured that the thoughts and prayers of the community are with them.

Thomas Martin was left shaken after the incident at the Tirmacrannon Road at Loughgall, which happened between 6.30pm and 7pm on Tuesday.

The pensioner confronted the intruder and was forced against the kitchen counter of his home before having his wallet taken.

The PSNI said the culprit was described as being in his 20s and 30s and was wearing a grey coat, grey trousers and a hat.

Newry and Armagh DUP MLA William Irwin knows the Martin family well and this morning visited the couple in their home to offer his support.

He has slammed those responsible for targeting the vulnerable gentleman, whom he described as having been left “shaken” after the ordeal.

Mr Irwin has also called for anyone who can help with information to bring those responsible to justice to come forward.

He said: “I spent some time with Mr Martin this morning and assured him and his dear wife that they are in the thoughts and prayers of the wider community in Loughgall, and we hope that they get over the shock of this ordeal as soon as possible.

“I have spoken to the PSNI on this issue and I know there has been a spike in this sort of crime in recent weeks. That will obviously be concerning for our elderly community and again it must be said that those behind these despicable acts deserve the most stringent sentencing by the courts.

“Mr Martin had his wallet stolen by the criminal who had pushed him up against the wall and then rummaged in his pocket for the wallet.

“I would echo the calls by police that anyone who may have witnessed anything suspicious in the area should contact the PSNI as soon as possible and pass on any information which will assist with their inquiries.”

She has appealed to anyone who witnessed anything or has any information to get in touch with the police in Lurgan on the non-emergency number 101. Altnernatively, information can be passed anonymously via the Crimestoppers charity 0800 555 111.