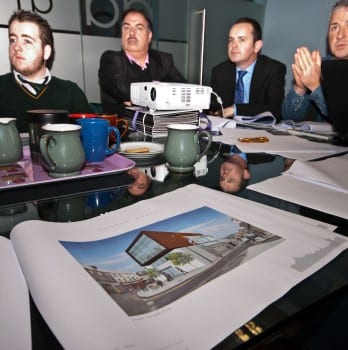 Culture Minister Carál Ní Chuilín has said it is important outstanding issues over plans for a £1.5 million Irish language centre in Armagh are resolved so that construction work can begin.

The Aonach Mhacha culturlann project is to be located at Lower English Street, on the site of the former fire station, which would be demolished.

In December 2013, Armagh I reported that a planning application for the development – which would sustain 12 jobs and create a further six – was due to be lodged.

And it was hoped at that time that the first phase of the scheme would be completed early in 2015.

However, despite an application having been lodged last July, it has yet to be given planning approval for work to start, never mind be completed.

It is currently being processed by the DoE Planning Service’s development control group.

It was Newry and Armagh Sinn Fein MLA Cathal Boylan who raised the time delay on the floor at Stormont this week, during an oral question session to the Department of Culture, Arts and Leisure.

Mr Boylan asked the Minister for an update on the Aonach Mhacha culturlann project.

Culture Minister Carál Ní Chuilín responded: “I am aware of the project to develop a cultúrlann-type project. As an update, the Member may be aware that £150,000 was earmarked to develop the site, pending the successful outcome of the business case, which we are still working through.

“That was the indicative figure that we hoped to invest in that area.”

Mr Boylan replied: “I thank the Minister for her answer. She is well aware of the time and effort that have gone into this project. Will she give a commitment to keep me updated on the project, because it is vital to Armagh city and district?

The Minister stated: “I will endeavour to keep the Member updated.

“I agree with him that it is important that the project is resolved and that construction starts.

“The Member and those involved in the development of this investment and application are well aware of DCAL’s requirements and they are very positive in proactively working their way through all the elements and additional information required.”

The former fire station was selected as the agreed location for the £1.5 million heritage centre for the promotion of the Irish language, arts and culture.

As Armagh I previously reported, the first ever ‘Cultúrlann’, or Irish language centre, in Armagh, will help to sustain 12 jobs and create a further six.

Directors of the collaborative, social enterprise known as ‘Aonach Mhacha’ – the assembly of Macha – commissioned DA Architects and Smyth Surveying to draw up ambitious design plans for the proposed development.

Development of the ambitious, new Irish language facility was intended to be carried out in two phases.

Phase One should have been nearing completion. It is planned to incorporate a “three-storey reconstruction that will potentially transform a derelict eyesore at a gateway site to the city into a landmark piece of architecture that will combine sympathetic, vernacular and traditional Armagh building materials with more contemporary, cutting edge design elements”.

During the course of this week’s Assembly debate, Mr Boylan also asked for reassurances that consideration would be given to other cultural hubs being set up in areas outside of Belfast and Derry-Londonderry.

He was told by the Minister: “I am keen to make sure that not just cultural hubs but, indeed, facilities, services and investment in the provision of public services are developed outside Belfast and Derry, particularly in smaller towns and villages and in newer cities.

“The cultural hubs, particularly in the Member’s constituency, are vital, not just because of what they provide, but in the context of a shared future, reconciliation, creative industries, inclusion and working with children and young people, older people and people who have been excluded.

“From what I have seen across the city in Belfast and, indeed, outside it, those hubs provide excellent opportunities for people to do very good activities, to put down roots and to give them access where they did have not have it before.”