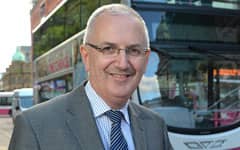 Resurfacing work on a section of Union Street and Tandragee Road will begin on Monday 22 September and will be complete by Thursday 16 October.

The Minister said: “This scheme will deliver important improvements to the road network and will increase the life of the road, greatly improving the strength and ride quality of the carriageway.”

Union Street will be resurfaced from Millennium Way to Sloan Street. This portion of Union Street will be subject to a road closure for through traffic on Monday 22 and Tuesday 23 September. From Wednesday 24 to Friday 26 September lane closures will allow traffic to flow one way from Sloan Street towards Millennium Way. This will be followed by a further one day full closure on Monday 29 September for the final resurfacing of the street.

Whist work is in progress traffic will be diverted via Russell Drive and Millennium Way.

Tandragee Road will be resurfaced from Roundabout B to Sloan Street and the work will be carried out in two stages.

The diversion for works on Tandragee Road will be via Sloan Street, Portadown Road and Tullygally East Road.

The diversion routes will be clearly signed and TransportNI and the contractor will make every effort to minimise inconvenience and would ask that the public exercise caution and patience whilst the works are in progress.

As with all works of this nature planned dates are subject to favourable weather conditions and DRD will keep the public informed of any unavoidable change to the programme of works.