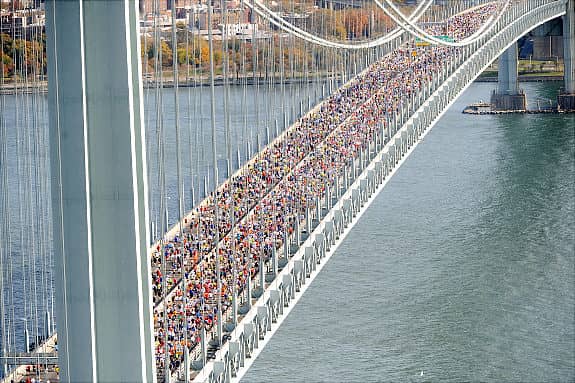 A PORTADOWN man is to tackle his second New York Marathon in November to raise much-needed funds for local cancer charities.

Michael O’Neill – who is the manager of Armagh City Reserves – lost his grandfather to cancer earlier this year.

And now the big-hearted Michael is hoping to help others when he runs on the Big Apple on November 3.

It is one of a number of fundraisers he is planning over the coming months to boost Macmilllan Cancer Support.

Michael told Armagh I: “I picked Macmillan because of their non-stop help to cancer patients and their families, as my grandfather died from the illness in April and I know how good they can be at helping out.”

The gruelling 2013 New York Marathon takes place on November 3 and, for Michael, it will be his second time competing, his first in support of ovarian cancer.

The Reserves manager, while busy training for the Marathon, is also working on other ways of adding to his total, calling on the help of some high-profile friends.

Added Michael: “I will be organising a few other fundraising events at the Armagh City FC which I am currently in the process of organising.

“But, at the minute, I’m running a raffle, which includes signed memorabilia from Aaron McCusker, star of Shameless and Dexter, who is a friend of mine, and also a signed Liverpool shirt from Jamie Carragher which he sent me, along with two tickets to a Celtic game which the club donated. My target is £2350.”

The industrious Portadown man is appealing to help from the public and hopes that Armagh I followers will answer that call!

“Most of us have been affected by cancer in some way and I’m sure everyone will therefore agree its a worthwhile cause,” said Michael.

“I have already started the training for this – which I thought would have been the hardest part – but the fundraising is proving as difficult, which is why I’m asking for the help of local businesses.

“Any donation would be gratefully appreciated, and I will be doing other fundraisers along the way which the local media will be involved in, so I’ll try and get everyone some coverage. I will also take time out to thank you personally on my Facebook and Twitter pages, which should be a bit of good advertising for your business as well!”

Anyone – members of the public or businesses – who feel they can help Michael meet his goal and raise much-needed funds for the fantastic Macmillan can check out the following link: https://www.justgiving.com/Michael-O-Neill1/

He’s a credit to County Armagh and we at Armagh I would like to wish Michael every success and good luck in his fundraising drive!