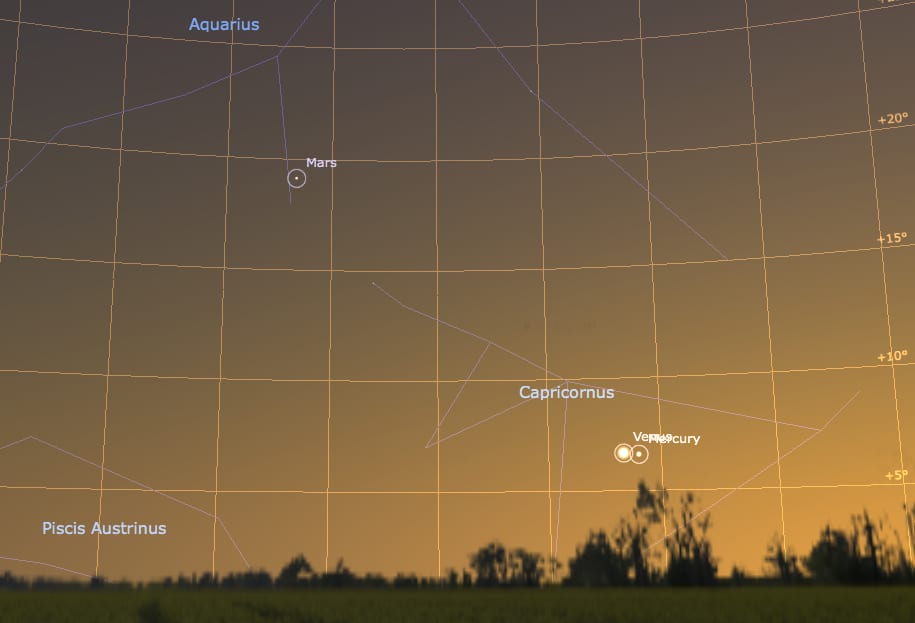 Armagh Observatory has today advised the public that the first two weeks of January will provide a rare opportunity to observe the planet Mercury, the smallest and fastest-moving planet in the solar system.

Mercury revolves around the Sun in an elliptical orbit with a period of just 88 days and at an average distance from the Sun of approximately 58 million kilometres.

Because this is much less than the average distance of Earth from the Sun, Mercury never strays far from the Sun in the sky.

It is always difficult to find in the morning or evening twilight, even when at its greatest angular distance from the Sun.

This year, however, Mercury occupies the same patch of sky, in nearly exactly the same direction, as its much brighter neighbour Venus.

The brighter planet, which is easily visible to the unaided eye given clear skies, is a celestial signpost to help find the elusive and much fainter Mercury.  Such close alignments of these two inner planets on the sky are quite rare, occurring on average just once every five years or so.

With good weather, that is, a clear, cloudless view of the horizon towards the southwest after sunset, then the two planets can be seen together in the evening twilight between approximately 4.30pm and 5.00pm.

In order to find Mercury, first identify the bright evening star Venus.  Then, preferably using a pair of binoculars, look at Venus.

Mercury should be visible in the same field of view, within a degree or so of Venus.

Anger at ‘reckless’ burning of car between school and chapel