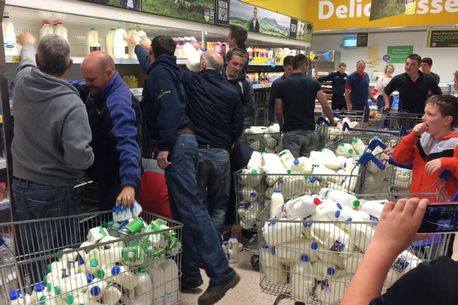 A local councillor has expressed hopes that a series of meetings to take place next week will help find a resolution to the current crisis within the dairy industry.

“There are numerous factors outside our influence that are contributing to the crisis,” he said.

“The current weakness in the euro against the sterling, abolishment of European milk quotas and the embargo by Russia are some of the factors impacting on the return price being paid to our farmers due to the over-supply of milk on the global market.

“The meeting today allowed for a more strategic approach in tackling these problems, bringing together a more political lobby advocating a review of the European intervention price which can ultimately begin to make dairy farming profitable again.

“Sinn Féin has always said that farmers deserve a fair and equitable price for their produce. We therefore support farmers in their demands, however it is important that the current protests which are taking place maintain peaceful and within the law.

“It is also imperative that there is more communication between all elements of the supply chain and I support Minister Michelle O’Neill in the approach she is taking to bring this about.

“I hope that meetings to be held next week will begin to bring solutions to the current problems allowing dairy farmers to concentrate in making their farms viable again.”