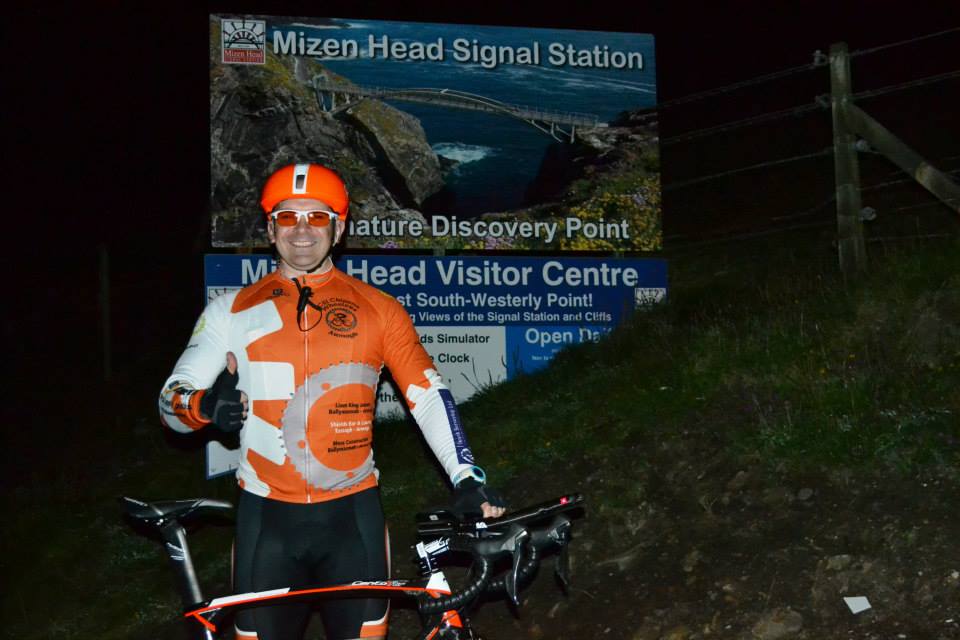 Armagh local Martin Rocks recently set a new record for a solo cycle from Mizen Head in County Cork to Malin Head, County Donegal. The previous record was just over 25 hours and Martin outstandingly covered the 600km journey in 22 hours, 29 minutes and 28 seconds.

After months of training and putting plans into place with his team, Martin set off after meeting up with the official CI Commissaire – who was required to attend in order to to adjudicate and time the event.

Many cyclists would commit two to three days covering this track, taking one day alone to get through County Cork – a stat which highlights the extent Martin’s achievement.

The Clady man admitted that he faced many dark moments along the way and had some serious talks with himself. But those who know Martin best know that he is a committed character, a man that will never give up on a challenge without a forceful fight and that’s exactly what he proved yet again.

Cycling has been a hobby of his for over 28 years now, first taking a passion for the pedaling when he was a student at Maynooth University in County Kildare. Each year Martin organises charity cycles at his old university, as well as taking on challenges like this one.

The Mizen Head to Malin Head challenge was probably the most difficult challenges Martin ever tackled. He was restricted to five minute breaks after every 150 km covered, and that time would be spent consuming a quick meal and receiving brief massage before getting back on the road again.

The inspiration cyclist was fulfilled by his achievement but believes that he never would have come close to breaking this record without his friends who supported him throughout.

“At the time emotions were running high but I couldn’t take it in. I was in focus mode throughout. The last 20k was constant relentless hills both up and down and the finish was slow at coming. The heavy rain didn’t help but I just needed to focus on reaching the finish.

“What a brilliant weekend it was in so many ways. It’s just so hard to take in all that has been achieved in a such short space of time, but more importantly, to have such good friends that wanted to be part of what I was trying to achieve.

“So while it was a fantastic event and so special to be able to take part in and achieve my goal, I count myself lucky. It was only made possible by my special support crew and my good friends. To them – I am so grateful for all their help, support and assistance. Good friends are hard to find, that’s why I’m blessed, I have such good friends.”