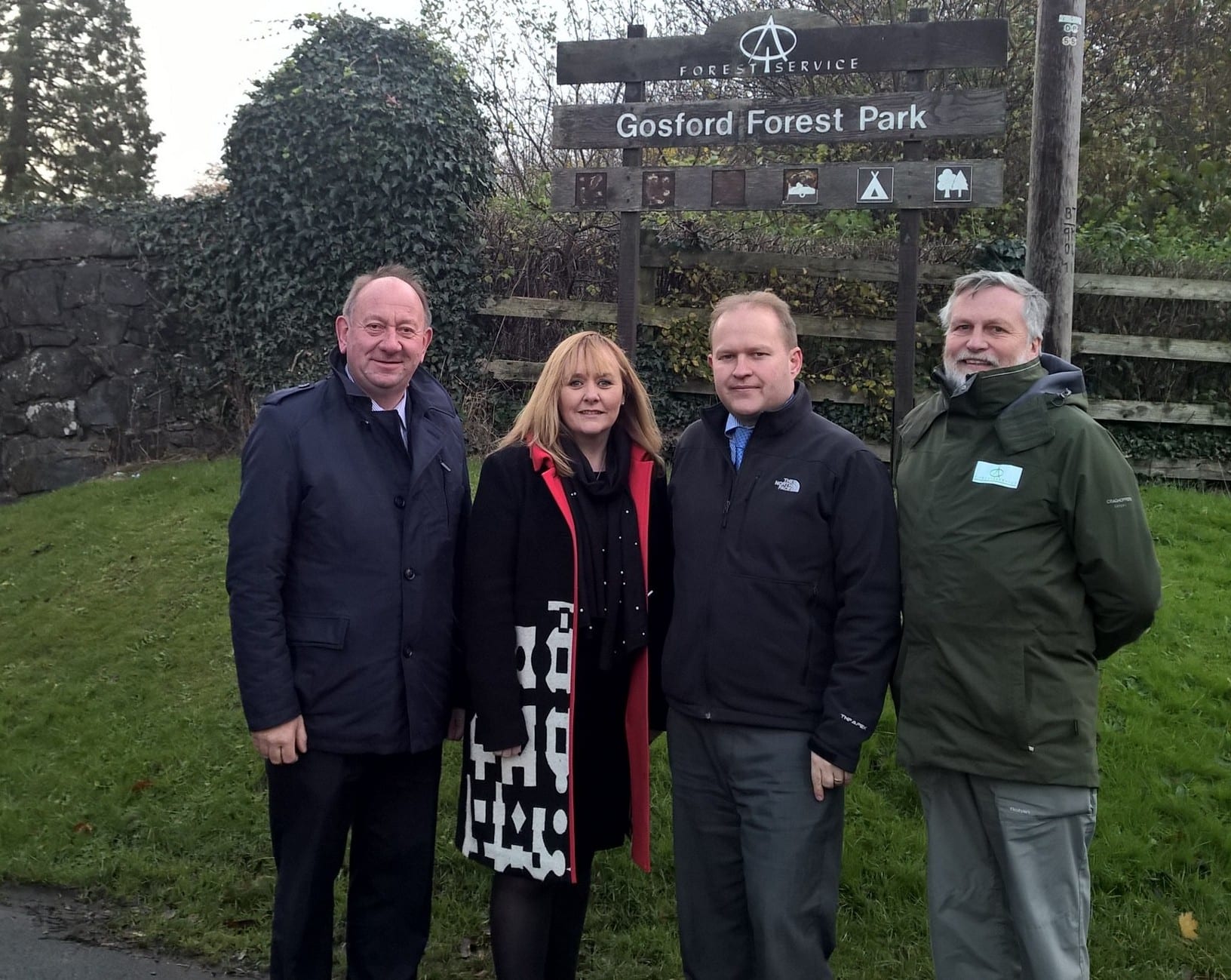 Promises to explore a range of options to improve road safety outside Gosford Forest Park have been given by a Government minister.

A series of accidents in the area has led to repeated demands for action to deal with traffic problems, including the practice by some of parking on the hard shoulder to avoid paying into the forest park.

Among the range of issues which will now be undertaken is a speed assessment on the main Markethill Road outside the entrance to the park.

Agriculture, Environment and Rural Affairs Minister Michelle McIlveen has visited Gosford to see for herself the problems which exist and to discuss potential solutions.

She did so at the invitation of Newry and Armagh DUP MLA William Irwin and local Councillor Gareth Wilson. Also attending was Forest Service chief executive Malcolm Beatty.

The site visit was primarily to discuss the ongoing concerns on parking on the hard shoulder at the main entrance.

Minister McIlveen said: “Mr Irwin has brought the issue of parking and the safety risks to my attention and I felt it was important to see the issue for myself.

“It certainly has been an essential visit as it is clear that the parking culture around the entrance is a safety concern.

“I will be looking closely at this matter to assess the options for improving the forest park entrance. This initial process will include liaising with the Department for Infrastructure – given their responsibility for the road network – and I understand a speed limit review is underway which encompasses the park entrance.

“All these various aspects will form part of my discussions into mitigating the risks at this location.”

Mr Irwin later described the meeting as “very useful” and said he was encouraged by the personal interest Minister McIlveen had taken in the matter.

“I was grateful to the Minister for taking time out to come down to Markethill and survey this matter for herself,” he added.

“There has been a great deal of concern locally on this matter and the risk to motorists and park users is considerable as a result of the parking culture which has developed on the hard shoulder.

“This will require a multi-agency approach to resolve and I am aware that the Infrastructure Department is currently assessing the speed limit across this busy series of junctions and Minister McIlveen is keen to assess what additional measures could be developed – in tandem with other departments – that would make the main entrance to the park safer for everyone.”

Cllr. Wilson added: “This was a good opportunity for the Minister to see exactly the difficulties that exist at the park entrance.

“The council locally has a growing interest in Gosford as a recreational facility and discussions are ongoing in terms of the future development of the site.

“The issue of safety, not just for park users but also for passing motorists, is obviously a big concern and I know following this meeting that the Minister shares our concerns.”

Both representatives have pledged to keep in close contact with the DAERA Minister and her officials, including the Forest Service chief executive, to move this matter forward and “hopefully reach a conclusion that addresses the very real concerns of local people”.