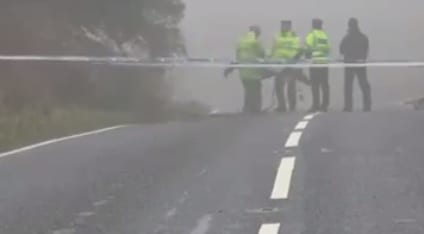 Friends of two young students who died in an horrific road accident this morning have been paying tributes to the life-long pals.

The two – who have been named locally as Andrew Gass and Mark Hutcheson – had been the driver and front seat passenger in a Vauxhall Astra car that left the Cladymilltown Road at around 8.30am this morning.

Both had been former students of Markethill High School and were said to be inseparable.

They had been studying engineering at the Southern Regional College in Armagh. Today they had been travelling to Portadown to compete in a competition when their car left the road and struck a tree.

Chief Executive Brian Doran spoke of the sense of shock within the college and described Andrew and Mark as “great characters” who shared a close bond.

It was reported that visibility on the road had been greatly reduced this morning due to fog.

A third passenger in the car, another young student, from Poyntzpass, remains in hospital where the Southern Trust has confirmed his condition as “stable”.

The two boys were popular in the County Armagh town and beyond and had a wide circle of friends.

They have been paying their own tributes via social media this evening after a tragedy which has shocked the entire community.

One of Andrew’s fellow students said simply “class won’t be the same”, and another described the pals as “two sound fellas”.

“God gained two more angels today,” wrote another, summing up the sentiments of most.

“Two fellas who went to heaven too early,” offered another friend of the 17-year-olds.

Andrew had worked with SFS Plastics Ltd, while Mark was a farmer. Scene of the crash on Cladymilltown Road

Both had been members of Mountnorris Young Farmers Club.

Tonight, it had been due to hold its annual general meeting.

Instead, club members are in shock and the meeting has been cancelled.

In a tribute on Facebook, Mountnorris YFC said: “Both Mark Hutcheson and Andrew Gass were valued members to us all here. They were always the life of the group, they added mischief and fun to every meeting.

“Both boys were a credit to the Hutcheson and Gass families and the community. Both had keen interests within the agricultural industry and Andrew in the previous year held a position on our commitee.

“Our prayers and thoughts are extended to these families and their entire family circle and the whole community! R.I.P Mark & Andrew.”

The Cladymilltown Road remained closed for most of the day and reopened shortly before 5pm.

Inspector Lynsey Barr has appealed for anyone who witnessed the collision or who noticed the Vauxhall Astra being driven on the Cladymilltown Road this morning to contact police on 101.

Local politicians have spoken of their own shock.

Employment and Learning Minister Dr Stephen Farry has also expressed his condolences to the families of the two young students and said his thoughts were with their friend who had been injured in the tragic accident.

Minister Farry said: “I was very saddened to learn of the death of these young men and of a third being injured. My thoughts are with all their families and friends at what must be a difficult time for them.”

Environment Minister Mark H Durkan issued a reminder to all road users to take care on the roads in light of recent tragedies.

He said: “My thoughts are with all of the families and the communities who have lost loved ones or who have loved ones suffering serious injuries. I know that the pain of such a loss is deeply felt for a long time.

“These deaths serve as a reminder of the danger we all face when we use the road, it is the most dangerous thing most of us do every day. We take it for granted, but we cannot afford to do so.

“I am very concerned about single every death or serious injury on our roads. I remain committed to doing all that I can to prevent the pointless tragedies on our roads. I have personally made road safety a priority and I will continue to work with my Executive colleagues, the PSNI, the Northern Ireland Fire and Rescue Service and the Ambulance Service and others to improve road safety.

“We all need to be extra vigilant. As we see far too often, normality can turn to tragedy in an instant. This reminds us that we must never, ever drop our guard.