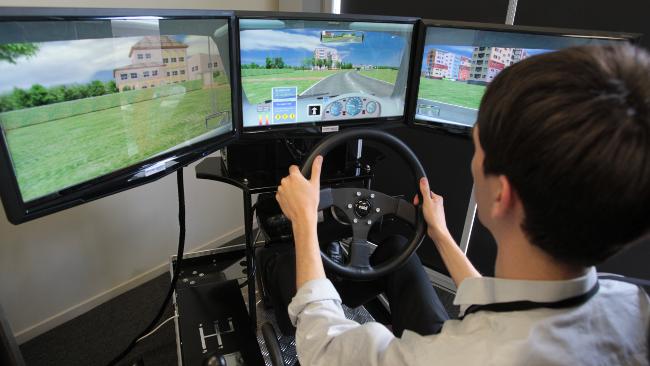 Consideration could be given to introducing driving simulators in colleges in a bid to reduce the number of fatalities among young people on our roads.

Environment Minister Mark H Durkan said the move would be worth exploring, with seven people having already lost their lives this month.

The suggestion was made in the Assembly by Newry and Armagh Sinn Fein MLA Cathal Boylan following the tragic deaths of Southern Regional College students Andrew Gass and Mark Hutcheson last week.

The teenage friends – who were laid to rest at the weekend – died after the car in which they were travelling left the Cladymilltown Road, outside Markethill, last Thursday.

On Monday night, at a meeting of Armagh City, Banbridge and Craigavon Borough Council, it was agreed – on the request of DUP Councillor Gareth Wilson – that a letter of sympathy be sent to the families, on behalf of Lord Mayor Darryn Causby, on their “tragic, tragic loss”.

And on Tuesday, condolences were also offered on the floor of the Assembly by Mr Boylan during Questions to the Environment Minister.

He said: “I take this opportunity to record my sincere sympathy and condolences to the families of Andrew Gass and Mark Hutcheson and, indeed, the families of those involved in the seven fatalities on our roads this year to date.”

The local MLA then went on to ask the Minister: “Is the message getting out?

“I appreciate that we are bringing forward new legislation, but does the Minister believe that the message on road safety is getting out? Will he consider working with other Departments to try to introduce a driving simulator into the colleges? Clearly, we have a major problem.

“There are families, extended families and communities out there who are suffering, and we need to try to eradicate road fatalities.”

Minister Durkan said he would “never rule out anything” in what he would do to make local roads even safer, and was “happy to work with anyone to do so, even Executive colleagues”.

He said the Department of Environment already worked closely with other Departments and with other road safety partners, such as those in the emergency services.

Minister Durkan described the suggestion of driving simulators in colleges as “a good one” and said it “might perhaps be worth exploring further”.

“It is certainly not something I would rule out,” he added.

In relation to getting the road safety message out, Mr Durkan continued: “We have done, and will continue to do, all that we can by way of TV advertising campaigns, back-of-bus advertising campaigns and other initiatives, such as giving a toolkit to teachers to educate children, sending our departmental officials out to schools and funding community groups, including even the GAA and young farmers’ clubs, to do their things with young people in rural areas to promote road safety.

“A lot has been spent on getting that message out there, but I do not know what could get the message out more effectively about the need for road users to be more careful than those harrowing figures that show that seven people have lost their life on our roads already this year — this month.

“Any death on the road is tragic, but when there are young people involved, as there have been many times this year, it hits home even harder.

“I think that should be enough to make other road users sit up, be aware and take more responsibility for their behaviour on the roads.”