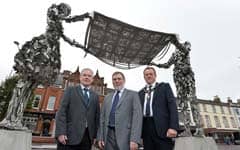 The Department for Social Development has provided part funding of £322,000 for the sculptures which are part of environmental improvement works which aim to greatly enhance the physical appearance of the town centres.

Speaking during a visit to view the completed sculptures, Minister McCausland said: “These newly installed art sculptures reflect the rich history and tradition of these attractive market towns. They are the first of their kind in both towns and provide a unique visual landmark within the town centres.

“The sculptures complement the recently completed public realm schemes in both towns and the combined works will contribute to the vibrancy in the heart of the town centres, fundamentally making them more appealing to residents, businesses and tourists.”

The Lurgan sculpture is on the former YMCA site in Market Street, while the Portadown Sculpture is in the green space between West Street and the Northway.

Mayor of Craigavon, Councilor Colin McCusker said: “These statues are iconic reflecting the traditional industries in both Portadown and Lurgan. They are inspiring and are certainly creating a lot of comment within both towns.

“They are not only artistic, but are also feats of engineering weighing in at over one tonne each. They are fabulous additions to both towns and I’m delighted to be here today representing the Borough at this historic moment.”

Deirdre Robb, Arts Council of Northern Ireland, added: “Public Art inspires, regenerates and invigorates the space and the people that surround it. I’ve every confidence that these outstanding sculptures by renowned artist, Maurice Harron, will bring a sense of place and pride to both Lurgan and Portadown, inspiring all for generations to come.”