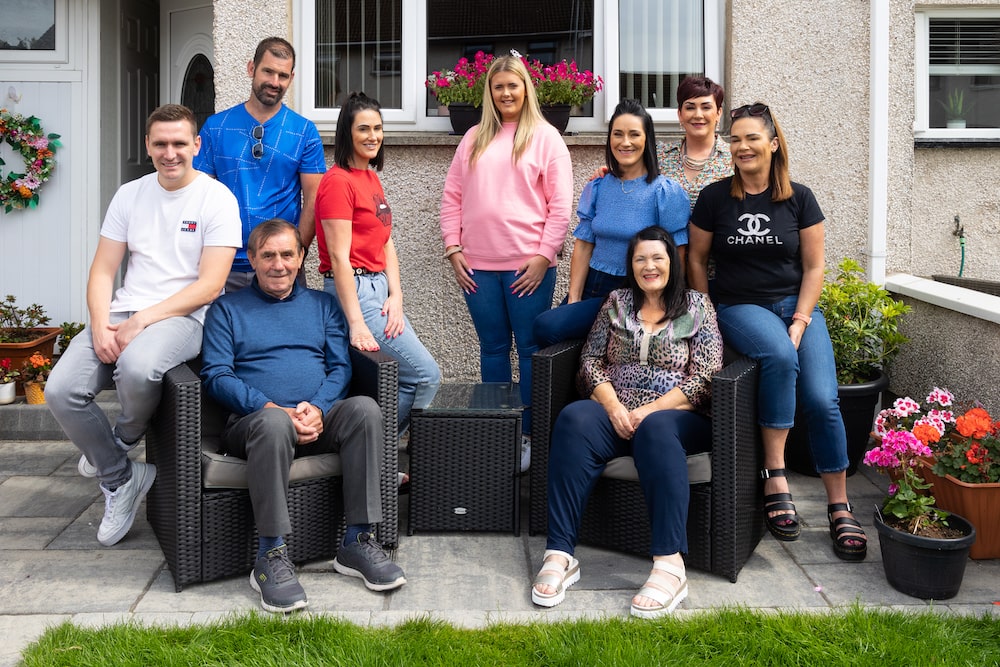 A great-grandfather who was diagnosed with lung cancer during the pandemic says he owes his life to his wife and daughters.

The 73-year-old says he will be forever grateful to his family that they persuaded him to contact his GP.

The retired bricklayer, who has eight children, 22 grandchildren and 16 great-grandchildren, believes he wouldn’t be alive today had he not taken the advice of his wife Margaret and his daughters.

Not one to “bother” his GP, Gerard had been feeling unwell for some time before he decided to speak to a doctor in March 2021. Referred to hospital, he was shocked when after a series of tests, he was told he had lung cancer.

Thankfully, after intensive chemotherapy and radiotherapy, Gerard’s cancer is stable and he is back enjoying a normal quality of life.

He says: “I owe my life to the fact I contacted my GP when I did. I know now that changes that are unusual for you could be signs of cancer. Finding it early saves lives.”

Before his diagnosis, Gerard was a fit and active man who played golf every week and continued to do brick laying for his son three days a week.

It was in the middle of the Covid pandemic in November 2020 that he began to feel unwell.

Gerard said: “I was never one to run to my GP. I don’t know if it is fear of what I might be told or that I just didn’t want to bother them.  My doctor knew immediately it had to be serious for me to have come to his surgery.

“On the day that I went, I had no energy at all and felt like I was going to collapse.

“I was coming home at night and feeling that I just needed to go to bed. I had been helping my son out and there was going to be another lockdown at Christmas, and I told him that I wouldn’t be back to work after that.

“It got worse – I could have slept 12 hours and still felt tired. I had no pain or any other symptom.  My wife and my daughters could see the change in me and wanted me to go to the doctor.”

After being referred for tests, Gerard spent time in hospital while doctors tried to find out what was wrong.

Initially they thought he had tuberculosis but that was quickly ruled out before a large cancerous tumour was found in his lung.

Gerard recalls: “A nurse came to my bed and told me they were asking my wife to come in for a meeting the next morning.  I knew then it was something serious. I asked her to tell me what it was and she told me I had cancer.

“The strange thing is that I never let it get to me. I didn’t lose a minute’s sleep and I was glad when my daughter came with my wife the next day for the meeting.

“They said I had a very common type of lung cancer, it was stage four and the tumour was large, about three and half inches by four inches. It was a pretty emotional meeting.”

Gerard was sent home from hospital to build his strength up in preparation for the start of chemotherapy just two weeks later.  He had three bouts of the treatment and when scans revealed that his tumour had shrunk dramatically, he received a fourth round of chemo followed by two weeks of radiotherapy.

His treatment finished on August 27 of last year.

He says: “Throughout it all I was determined to stay positive and my oncologist, Dr Uprichard, was great. He was very encouraging.

“I was never sick with the treatment and when it was over the consultant told me the tumour had shrunk immensely. He said it was unbelievable.”

Gerard is having regular scans to ensure the tumour is not growing again.  He now feels back to good health and is playing his beloved golf again.

He adds: “I wish I had gone to my GP when I first started to feel unwell in November as maybe the tumour might have been a lot smaller then.   I think I’m not the only one who puts off going to their GP and I would urge anyone with any kind of symptom not to ignore it, you could be risking your life.”

This is why Gerard is backing ‘Spot Cancer Early’ – a new early diagnosis initiative aimed at the over 50s.

The campaign follows a survey in February 2022 which revealed that 40 per cent of people in Northern Ireland who experienced a possible cancer symptom did not contact their GP within six months.* Running throughout September and October, the campaign uses a powerful TV advert, that features a man in his 50s who has unexplained weight loss and a cough that won’t go away. He debates with himself whether he should get his symptoms checked and eventually decides to call his GP.

The ad finishes with the charity’s vital message: “Changes that are unusual for you, like unexplained weight loss or a persistent cough, could be signs of cancer. Finding it early saves lives.”

The campaign is funded by the Department of Health Cancer Charities Fund and supports the cancer strategy in Northern Ireland. It includes tv adverts, posters, social media and adverts in newspapers.

Health Minister, Robin Swann said: “We know that early diagnosis is key to fighting cancer, however the pandemic has resulted in fewer people coming forward to their GP. Therefore, for anyone who has concerns about their health, or if you have noticed a change in your body that’s not normal for you, then contact your GP. Do not downplay symptoms or put off speaking to your GP. The earlier cancer is detected the quicker it is treated which can lead to better outcomes.”

Cancer Research UK chief executive, Michelle Mitchell, said:   “It’s important people in Northern Ireland know that their doctor wants to hear from them if they are experiencing any symptoms that are unusual or persistent for them. In most cases it won’t be cancer, but it’s best to get it checked out because diagnosing cancer at an earlier stage means treatment is more likely to be successful.

“We know it can sometimes be difficult to get an appointment with a GP, but it’s vital that people come forward so if they do have cancer, they can get their diagnosis and begin treatment as soon as possible.”

The charity is urging all political parties in Northern Ireland to commit to investing to recruit and train more primary care staff, including GPs. A survey carried out in February 2022* found the most common reasons for people in Northern Ireland not seeking help about their health were:

· Difficulties in getting an appointment (18%)

· Worrying about putting extra strain on the NHS (13%) and

Despite GP surgeries facing unprecedented workloads, Cancer Research UK is urging people not to delay contacting their doctor as early diagnosis can save lives. Cancer doesn’t stop and while it may take longer than usual to get an appointment, it’s vital that people come forward as spotting cancer earlier means treatment is more likely to be successful.

Each year 9 in 10 of all cancer cases diagnosed in the UK are in people aged 50 and over** and around 9,600 people in Northern Ireland are given the news that they have the disease***

Cancer Research UK’s work into the prevention, diagnosis and treatment of cancer has been at the heart of progress that has seen survival in the UK double in the last 40 years.

If you have noticed a change in your body that’s not normal for you, contact your GP.