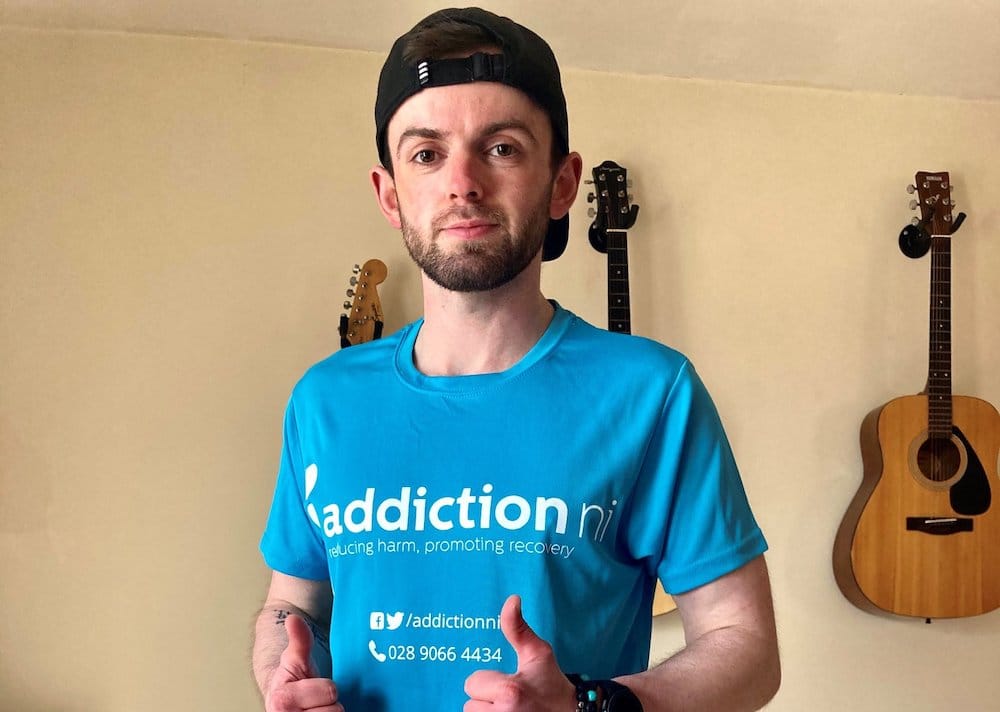 A Lurgan man who was drinking himself into an “early grave” said the thought of leaving his son behind without a father was enough for him to take action.

This month, Mick Henderson is celebrating one year of sobriety, and as a way of giving back to Addiction NI – who have helped immense on his journey – the 26-year-old is completing a 105km challenge to raise funds for the charity.

Mick said that without the help of the service he would not be where he is today and saw the gruelling task as a way of giving back and showing how far he has come in the last year.

It was on April 18, 2020, in the midst of the first lockdown that a then 25-year-old Mick woke up to a trashed flat, after what he described as a “breakdown” the night before.

For the first time in his life, the young man revealed that he had the clarity of mind, knowing he had a problem to call his GP, who referred him to Addiction NI.

Speaking to Armagh I, Mick said he had a strong determination to succeed in his battle for sobriety, both for himself, and his young son.

“I knew I was going to drink myself into an early grave,” he confessed. “I had problems with my liver and the thought of leaving behind a son without his dad scared me.”

Mick admitted that although his problems with alcohol began pre-pandemic; the addition of the first lockdown made a huge impact.

He said: “I was furloughed from work and it was getting to a breaking point. Nearly everyday, I was going to the off-licence and getting drink, it just got to the point where I thought I need to knock this on the head.

“People around my age turn more towards drink and drugs, especially during lockdown, thinking the only thing to do is drink but these services are here to help people; without them I wouldn’t be where I am today.”

For Mick, this was the first time that he had reached out for help and accepted that he needed it.

“I was sort of in denial at the start but I was drinking three or four times a week, sometimes five,” he said, “then I was going into work hungover, even sometimes drunk when I was on night-shift.”

Mick confessed that he had battled with depression for many years and commented that the two combined were a “very dangerous combination”.

Due to restrictions, Mick’s weekly counselling meetings with Addiction NI were conducted via telephone but he found their help invaluable.

He commented: “I didn’t know about them before I was referred but if I didn’t have them at the start I would have been lost. They gave me the tools to prevent me relapsing and helped identify my triggers.”

Mick admitted that the early stages of his road to ditching the booze were difficult; he was advised to remove himself from the temptation of friends he would drink with and family who would drink often.

He said: “I was a bit lonely at the start but I did have the support of my family behind me all the same, after I told them that I had that problem.

“The problem was, for me it was never one. I would start off trying to be sensible but next thing I know it is five or six o’clock in the morning and I am still going.”

Commenting on how he feels one year on, Mick said: “I have never been healthier, both physically and mentally; I wouldn’t say I was depressed anymore, I do have my down days but everybody has them.

“My family have noticed a difference too. I kept getting told I was completely different person, I was moody and I had an attitude, probably because I didn’t have a drink in my hand, but now everything is on the up.”

The recovery also led him to improve his health physically, teaming up with his cousin, who works as a personal trainer to get in shape.

“A year ago, if someone said I would do 105K in a month I would have laughed in their face but now I am doing these runs as my way of giving back.”

Mick said that over the last year had also been contacted by friends who had been inspired by his achievements.

“If I inspire just one person who wants to stop or knock it in head just a wee bit I am happy with that,” he added.

If you would like to find out more about Mick’s fundraiser or to make a donation, you can do so by visiting his Justgiving page.