We will be speaking with motorists and pedestrians in a determined attempt to jog memories. This is just one part of an extensive investigation, in which we’ve already carried out hundreds of house-to-house enquiries and seized over 3,000 hours of CCTV footage. " 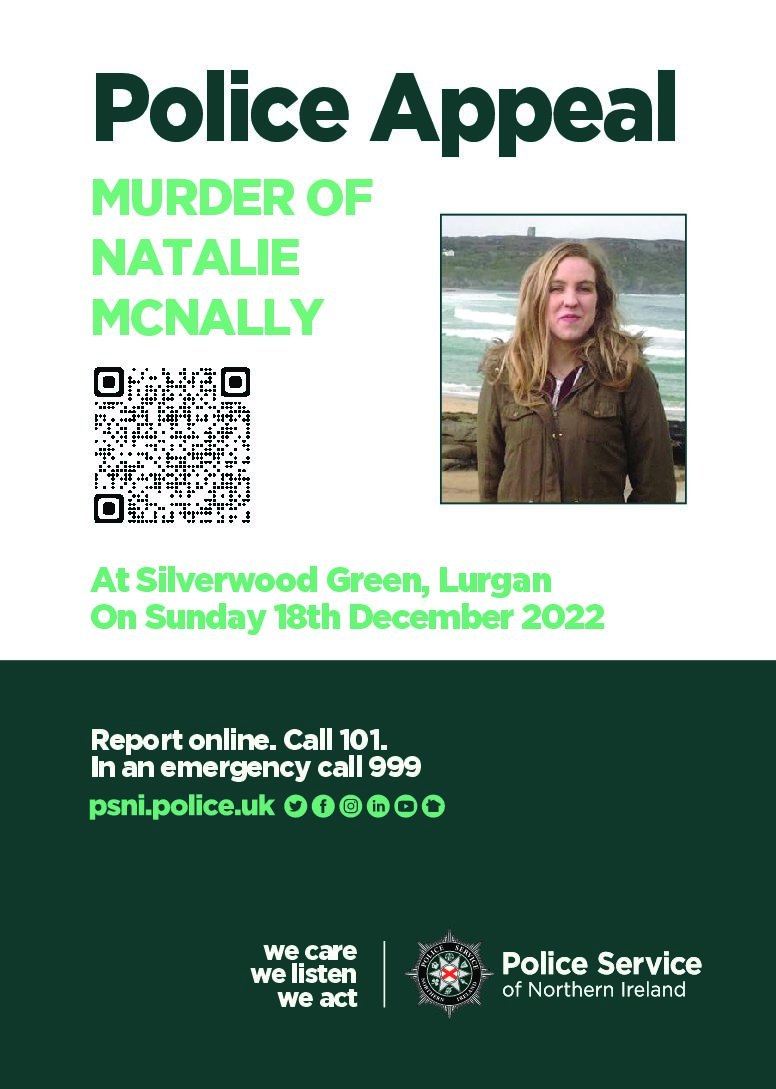 Detectives are set to revisit the scene of the murder of Natalie McNally three weeks after her shocking death.

Natalie, who was 32 years old, was fatally stabbed on the night of Sunday 18 December in her home in Silverwood Green in Lurgan.

Tomorrow, Sunday, detectives from the Major Incident Team will return to the scene as a fresh appeal is made.

Detective Chief Inspector Neil McGuinness said: “Tomorrow, Sunday 8 January, will mark three weeks since Natalie, who was 15 weeks pregnant, was brutally murdered in her own home.  Tomorrow our officers will be revisiting the scene.

“We will be speaking with motorists and pedestrians in a determined attempt to jog memories. This is just one part of an extensive investigation, in which we’ve already carried out hundreds of house-to-house enquiries and seized over 3,000 hours of CCTV footage.

“The deaths of Natalie and her unborn baby have left unimaginable heartache to a loving family, whose world has been turned upside down.

“Amidst their pain, Natalie’s devoted family have, somehow, found the strength to appeal publicly for anyone with information to do the right thing and speak up.

“And, likewise, we remain absolutely steadfast in our determination to bring the killer to justice.

Detective Chief Inspector McGuinness continued: “We have released CCTV footage for all to see, and our efforts to identify the man in this footage remain ongoing. You’ll see the suspect arriving at Silverwood Green that night at 8.52pm, and you’ll see the same figure walking away at 9.30pm.  I want to keep this image firmly in your mind.

“Please remember, this was the night of Sunday 18 December – that’s the same day as the World Cup Final. I’m asking you to cast your mind back to that Sunday. If you witnessed anything untoward – no matter how insignificant it may seem – or if you have captured dash cam or CCTV footage, please get in touch.

“I’m also keen to highlight the reward of up to £20,000 from Crimestoppers, who are a charity and independent of the police.

“The reward is being offered for information given directly to Crimestoppers that leads to the arrest and conviction of those responsible for Natalie’s murder. Crimestoppers take information completely anonymously, meaning they will never ask for or store any of your personal details.”

Contact Crimestoppers on freephone 0800 555 111 or online at www.crimestoppers-uk.org. There is no caller line display, no 1471 facility and computer IP addresses are never traced.

Searches carried out in Silverwood area of Lurgan