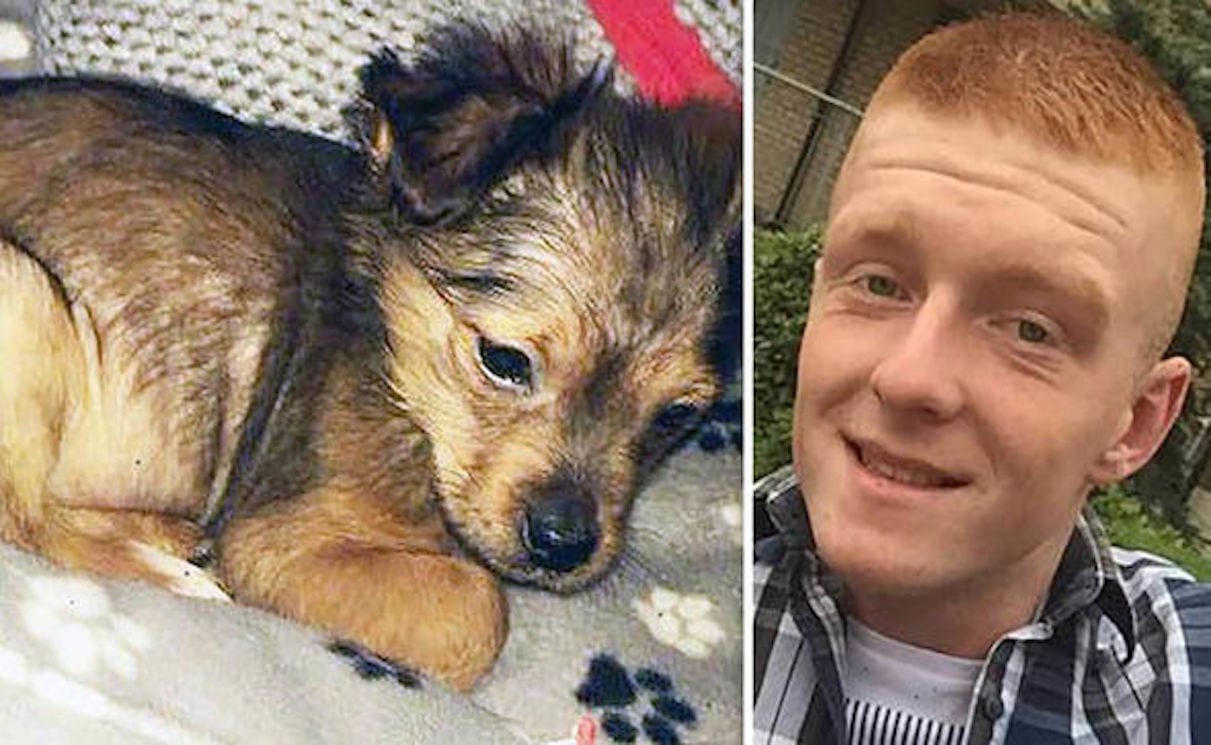 A Lurgan man who admitted to killing a defenceless 12-week-old puppy in a sickening hammer attack in February 2018 has been handed a 30-month sentence and a three decade ban on owning animals.

In sentencing the 24-year-old, the judge described his actions as “vile, disgusting and savage”.

Kyle Keegan, of Gilpins Manor, had been due to go on trial at Craigavon Crown Court last month but changed his plea at the eleventh hour when he confessed to causing unnecessary suffering to the puppy.

He appeared in the dock wearing a grey T-shirt and grey tracksuit bottoms for sentencing at the Crown Court on Wednesday.

It was heard that on February 2, of 2018, there was a party held at an address in Ailsbury Park, a Lurgan.

A young lady, who lived at the address, had recently got a puppy crossbred, this pup was named Sparky, and was approximately 11 weeks old at the time.

The party continued into the early hours of the morning with some people remaining in the flat – including the defendant.

That morning the young lady fed her puppy, who was in a cage in the property.

Three youths, including Keegan, remained in the property at this time, watching TV in the living room.

The puppy’s owner then went to her father’s house whilst the three youths continued drinking.

At 5pm, she received a call from a friend telling her to return home as Sparky was missing.

She searched the home and surrounding area and also got a friend to make Facebook appeal but to no avail.

On February 4, the dog owner was informed that the puppy was in fact dead in a bin; a bin she had checked that night but because of the darkness, could not see anything.

The next morning the puppy was found contained in a Tesco bag in the bin at the property.

A hammer was also found by the resident beside a washing machine; this had not been at the property prior to the incident.

She contacted a number of individuals who had been at the house, one of which was Keegan.

When she asked him if he had killed the puppy, Keegan replied: “I was drunk, I can’t remember.”

The dog owner later found the defendant’s T-shirt at the property, with specks of blood on it.

Police attended the address after receiving a tip that a dog had been killed. The hammer, the puppy’s remains and the T-shirt were seized.

A post mortem revealed Sparky had received multiple fractures to the skull, trauma to the brain and had inhaled blood into the lungs.

The vet who carried out the post mortem stated that this was caused by blunt force trauma to the head.

Crime scene investigators attended the property on February 9 and obtained photos of blood on the wall of the rear hall.

Swabs of blood from the wall, T-shirt and hammer, along with tissue from the dog, were forensically examined, with DNA results strongly supported that they all came from the dog.

When interviewed on February 6, Keegan claimed he was so drunk that he had no memory of that weekend.

He confirmed that the T-shirt found belonged to him and that he would not have leant it to anyone else.

However, it was heard that Keegan did remember that he consumed two 10-glass bottles of whiskey over that weekend.

Prosecuting barrister Nicola Auret outlined that there were a number of aggravating features in the case.

Namely, these were the use of a weapon, the fact the defendant was intoxicated at the time and that he used unnecessary violence.

She stated that there would be an application to prohibit Keegan from owning animals and she highlighted that the maximum sentence for this offence had been raised to five years in custody.

His Honour Judge Neil Rafferty said: “Any animal is at some level vulnerable but it is difficult to imagine an animal more vulnerable than an 11-week-old chihuahua puppy”.

Defence barrister Barry McKenna stated: “It is difficult to rationalise this condemnable act given that the defendant shows no evidence of violent tendencies and in fact declares himself an animal lover.”

Judge Rafferty commented: “Given what he pleaded guilty to that does not sit well with me.”

Mr McKenna added: “It is frightening and scary to the defendant, the depths to which people can plunge under the influence of drugs and alcohol.

“The defendant says he has no memory of the event, or most of that weekend, although I know your worship may be sceptical of that.

“This was deeply inexplicable, there was no lead up to this offence.”

Mr McKenna highlighted that this property was regarded as a “party house” and that there was a “strong likelihood” someone witnessed the offence or that others were involved.

He stated that although there had been media coverage that there was a microwave involved in the offence this was disproved.

Mr McKenna said: “This was a good working man, however, he lived a parallel life where he worked during the day but in his spare time partied until matters came to a head in this catastrophic fashion.

“On clear instructions, he is deeply, deeply sorry and horrified by what he has done, it is accepted that the custody threshold has been crossed in this case.”

Judge Rafferty, in sentencing Keegan, said: “This was an attack on a defenceless dog which is inexplicable but you have said that you cannot remember it.

“You are a young man with no great record, nothing in prior which would have cause for concern.”

He commented that the post mortem revealed the puppy was struck two or three times to the back and side of the head as well as the shoulder.

This, he stated, was an “inhumane death” for this dog to suffer.

Judge Rafferty said: “Quite frankly put, these actions against this puppy were vile, disgusting and savage.”

He arrived on a starting point for sentencing of four years in prison, taking into account Keegan’s age and personal circumstances this was reduced by six months.

Judge Rafferty stated: “This sentence is not just to punish you but to deter others; you must serve as an example to others.”

A further 25% was taken off for Keegan’s plea preventing it from going to trial.

This gave a total of 30 months, half of which will be spent on licence.

Judge Rafferty finished by saying: “Your actions against this small and defenceless dog were barbaric, there is little that can be said to express the horror of this small dog’s death at your hands”.

In addition, Keegan was prohibited from owning any animal for a period of 30 years.