Home Bargains’ new Lurgan store getting bigger as it now plans to take on two units!

Work is at an advanced stage and expected to be completed shortly with the amalgamation of the two units, if approved, giving Home Bargains a gross floorspace of over 2,300 sq metres - almost 1,000 sq metres more than originally planned 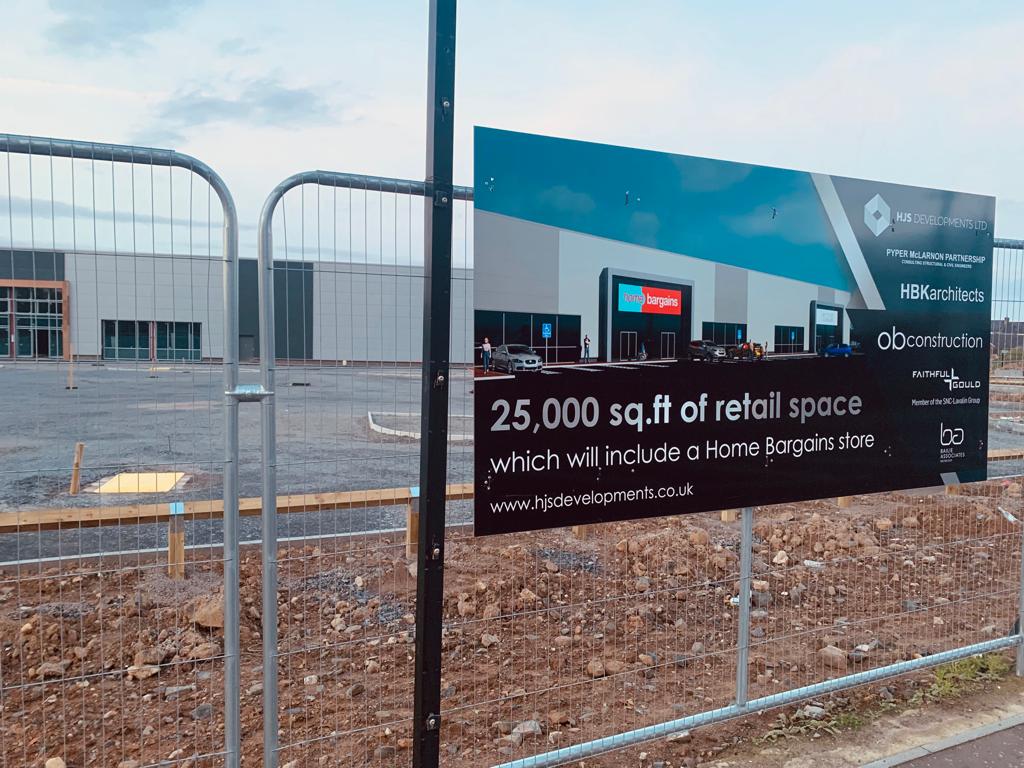 A new multi-million pound Home Bargains store in Lurgan looks set to be much larger than originally intended.

The budget retailer was to take on one of two units – now at an advanced stage of construction and due for completion shortly – on lands north of Millennium Way.

But now Armagh I  can reveal that Home Bargains – which would create 75 jobs – intends to take over both properties in order to meet its needs.

Last year we revealed that plans were being approved for the site with the first unit – a supermarket – to be 1,393 sq metres and officially confirmed as Home Bargains. Its parent company TJ Morris had written a letter to ABC Council calling for the application at the Millennium Way Retail Park to be approved.

The second – 929 sq metres – was earmarked for a “bulky retail warehouse style operator” who had not been identified at the time.

The changes – if given the go-ahead – will now see Home Bargains boast a gross floorspace of 2,323 sq metres – close to 1,000 sq metres more than originally planned.

In approving the major development last summer, various conditions were laid down relating to the two stores, the location of which was described specifically as being on “vacant lands north of Millennium Way (approximately 160M west of Gilford Road /Banbridge Road and Flush Place roundabout) and south of Shaerf Drive (Approximately 40M south east of Queens Walk and Shaerf Drive junction) Lurgan”.

And one of these reveals that Home Bargains wants to take on both planned units.

According to a planning supporting statement: “It was confirmed during the processing of the original application that Home Bargains would be the end user of the development.

“Home Bargains have now confirmed that they have a demand for a larger store and propose to occupy the full approved space.

“As such, whilst the original application was designed as two retail units, they can easily be amalgamated through the removal of a subdividing wall to combine Units 1 and 2 into a single unit.”

When originally being considered, Home Bargains had confirmed to be unacceptable 1,394sq m was the minimum size required which was why suggestions the retailer move to the old Tesco store were ruled out.

The conditions given in granting approval related to floorspace and other aspects on an application consisting of two units.

The changes – for which a pre-application consultation was staged in August this year – can be easily achieved, according to those behind the project.

According to a design and access statement: “As two units there are two entrances to the building. If the Section 54 application is granted planning permission and a retailer can occupy the entire building, it would remove the requirement for the second main customer shop entrance to the building and would remove the need for a second entrance to the storage area at the rear of Unit 2. “This can be achieved by simply the closure and locking of the entrance and storage doors to Unit 2 and left dormant, or by the removal of the doors and re-clad in the existing approved materials as a di minimis or minor amendment to the approved development.

“The principal of the access to the development will be that as a single unit, there will be a single point of access to the building for the public.

“The entrance to the amalgamated unit will continue to be electronic sliding doors. Access will be level – no steps – to prevent trip hazards and allow people in wheelchairs and pushing trolleys and prams to easily enter the building.

“There will be no changes to the access to the site or the car park from the public highway or surrounding areas.”

The parking plans remain the same with a total of 147 car parking spaces – as well as 18 disabled bays – included.

The applications to change conditions are now currently under consideration and a decision is expected shortly.