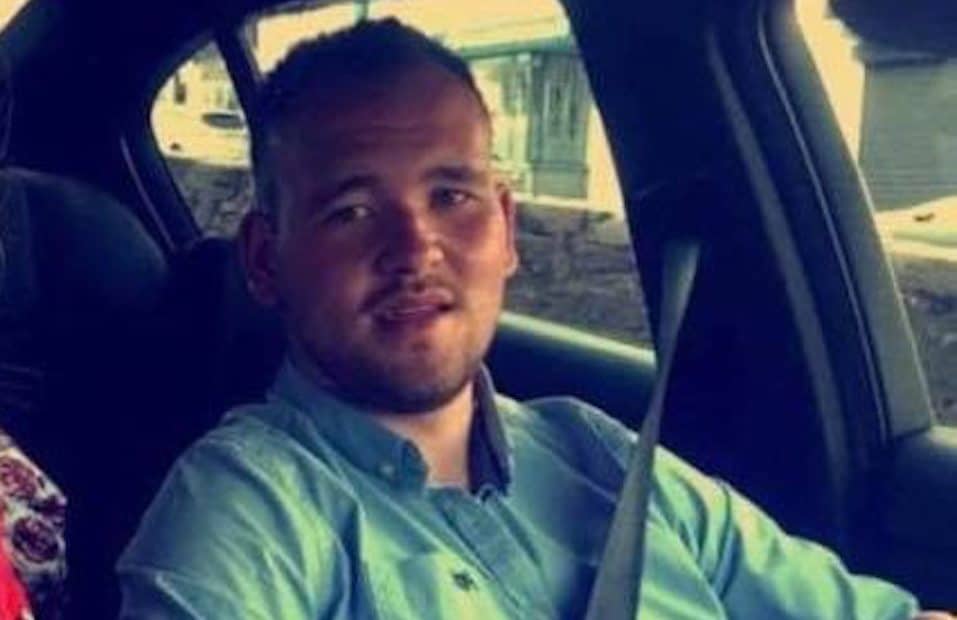 Mourners at the funeral of a hugely popular young Gilford man have heard a how a “dark cloud” came over the “gentle giant” who was remembered as the “life and soul” of the party.

Ryan Conn passed away suddenly, at the age of 24 , on Saturday.

He was laid to rest following Requiem Mass at St Patrick & Colman’s Church in Laurencetown on Wednesday morning.

Fr Gerald Powell, addressing the small congregation of family members, as well as online viewers, told many stories about the young man, who was affectionately know by his parents as “our big son”.

“Today, we are part of what is probably most painful for all those who are left behind – the sudden death of someone so young, so popular,” Fr Powell said. “No human thoughts can understand it.

“Since the sudden passing of Ryan, you his family and friends have shared memories of who he was and what he meant to you. We are heartbroken at his passing but we cherish his life and all the memories we have of him.”

Fr Powell stated that after a difficult birth at Craigavon Area Hospital, Ryan had to be resuscitated and spent the first month of his life in the special Baby Care Unit.

“After he came home, he didn’t sleep for a year,” the priest said. “He attended St John’s Primary School in Gilford, before attending St Patrick’s College in Banbridge.

Fr Powell explained that from his teenage years Ryan had displayed great skills in the area of entrepreneurship.

Having realised that children from rural areas did not have the same access to sweets, he promptly stocked up with treats from the local Spar.

“He set up his own wee business, during break time,” said the priest. “All went well until his mum received a phone call from the school.

“The problem wasn’t so much the selling of the sweets, but the fact that he was selling them to a class of children with ADHD, their sugar levels went through the roof. That didn’t bode well for afternoon classes in the school.”

Also, when his mother offered to pay for half of a new phone, Ryan went off and borrowed his father’s lawnmower, strimmer and powerhose, and set up his own gardening service.

Fr Powell said: “He had 18 regular customers at the age of 13, earning over £200 a week, and also walked dogs for people who were on holidays.”

“If a job, needed two men,” said the celebrant, “Gerard would say, King Conn will do it. Obviously due to his stature, Ryan was affectionately known as King Conn.”

Ryan went on to find work in labouring, most recently with Fleville’s where, according to Fr Powell, he “loved driving the dumper”.

“Ryan used to joke that he was able to do 15,000 steps per day, according to his smartwatch. This was in fact due to the fact that every time he put his foot down on the dumper accelerator it counted as a step.”

Alongside this employment, the “hardworking” Ryan also cleaned lorries at Bairds in Loughbrickland on Saturdays.

Fr Powell said: “Ryan was a very popular young man with friends of all faiths, but Ryan was most loved at home, where he was affectionately known by his parents as ‘our big son’, and by his sisters, Emma and Sarah, as ‘my Ryan’.

“He was both loved and adored, and he knew he was. His mom said he was a gentle giant with hands like shovels, the life and the soul of the party when he was out with friends.

“He enjoyed the craic, enjoyed his holidays with holidays being known as Ryanair.”

The priest explained to the congregation that 18 months ago Ryan suffered from an “acute bout of depression” which led to him spending 10 days at the Bluestone Unit at Craigavon Area Hospital.

“Thankfully he recovered well at that time and never looked back. He enjoyed getting well and loved his training sessions with the boxing club, with Clodagh Mc Comiskey, where he lost a lot of weight,” he added.

However, on Saturday evening, appearing in “great form” following a Chinese meal with his parents, Ryan went out with friends but unfortunately did not return home.

“His mother Sharlene said, in the short time he had he lived his life,” Fr Powell said, “Today we can look on his sudden death in different ways.

“The dark cloud, a moment of intense loneliness and an experience we resist. Don’t wish to talk about but we’ll all deal with it, in our own individual ways.”

The priest added: “Personally I didn’t think Ryan wanted to die. It was a moment of uncertainty. He forgot how to live.”

Many paid tribute to Ryan on social media, being described as “one in a million” and “the life and soul of the party”.

One woman wrote: “I want you to give me one of your big bear hugs and say it’s all OK. The people that didn’t know you or didn’t have you in their lives I feel so sorry for them because you brought so much joy to mine.”

Another commented: “My heart is broken. Ryan Conn, the most gentle, caring, hilarious, lively, amazing human being! Blessed to have had you in our lives!”

Former employers, EMA contracts, wrote: “We are deeply saddened of the news that came to us this morning of the passing of Ryan Conn.

“Ryan was not only a past employee with EMA contracts, but a friend to everyone he worked along with.”

Ryan was the precious and much loved son of Michael and Sharleen and cherished brother of Emma and Sarah. May he Rest in Peace.