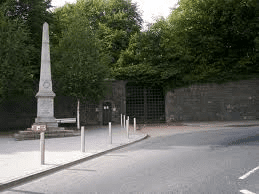 The Royal British Legion in Tandragee has been given permission to erect four information panels at the Co Armagh town’s war memorial as part of its Tandragee Remembers project.

Armagh City and District Council is responsible for the maintenance of memorials but has no input into the names and text which would appear on them. It will, however, obtain details first of what is to be written on the plaques.

Tandragee Remembers is part of the local Legion’s commemorations of the 100th anniversary of World War 1.

It involves placing four information panels to the rear of the war memorial that would tell the stories of those named on it.

The Legion has been awarded up to £10,000 to fund the project from the Heritage Lottery Fund (HLF).

The award was made last October but the money will not be released until the local branch secures a letter from the owners of the property showing their approval.

The council has now decided to grant that permission.