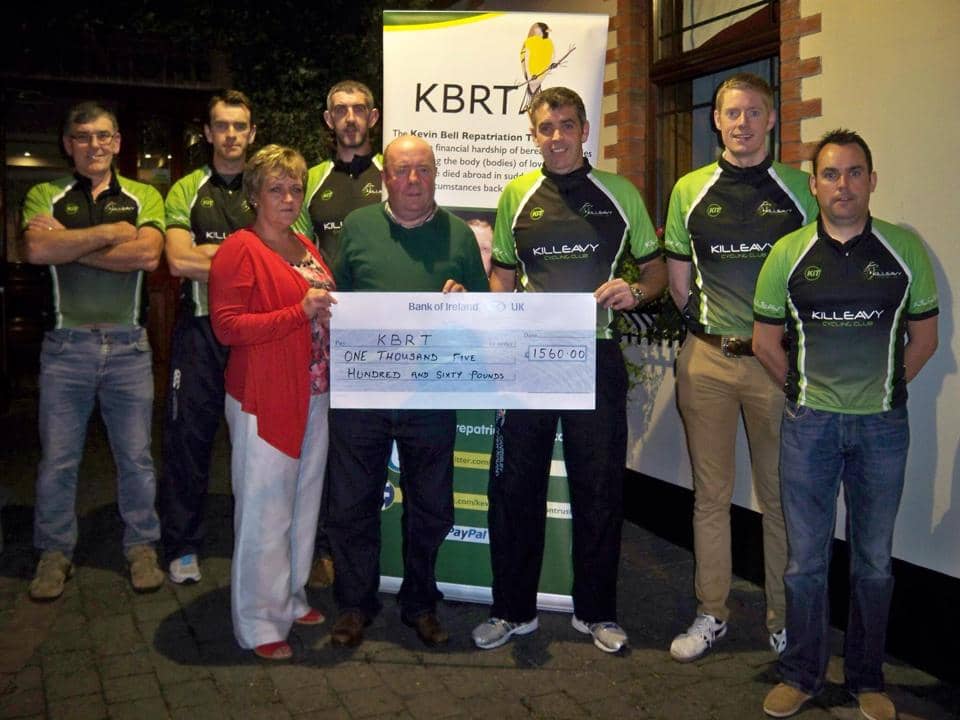 Killeavy Cycling Club have raised a fantastic £1,560 for the Kevin Bell Repatriation Trust from their recent annual Charity Cycle.

The Trust was set up and named in memory of a young local man who was tragically killed after being struck by a vehicle in New York.

This week the club handed over the proceeds of the annual cycle, held on the roads around South Armagh and Louth in August, to Kevin’s parents, Collie and Eithne.

The Trust is an all-Ireland charity which has crossed all divides to provide assistance to families in need.

In its own words, The Kevin Bell Repatriation Trust aims to alleviate the financial hardship of bereaved families repatriating the body of a loved one, who has died abroad in sudden or tragic circumstances, back to Ireland.

It was in June of last year that 26-year-old Kevin, from Newry, was killed in a hit a run accident in the Bronx district of New York.

Kevin was a talented footballer, a proud Down man, with connections to the Mitchel’s Club, and to Killeavy through his association with Irish Dancing.

After his shocking and untimely death, the locals in Newry organised a fundraiser to repatriate Kevin from New York.

In one night £42,000 pounds was raised, with much more money having been raised since.

Kevin’s parents, Collie and Eithne, made a decision to set up a trust in his memory to help other families with the financial expense of repatriation of loved ones that would die abroad.

And now Killeavy Cycling Club have added significantly to the funds to help provide that valuable help.

As one of the main aims of the Trust is to provide financial assistance to bereaved families, ongoing fundraising is required to assist the excellent work being undertaken.

Pictured: Members of Killeavy Cycling Club present the cheque for £1560, the proceeds of the Charity Cycle in August, to Kevin’s parents, Collie and Eithne.