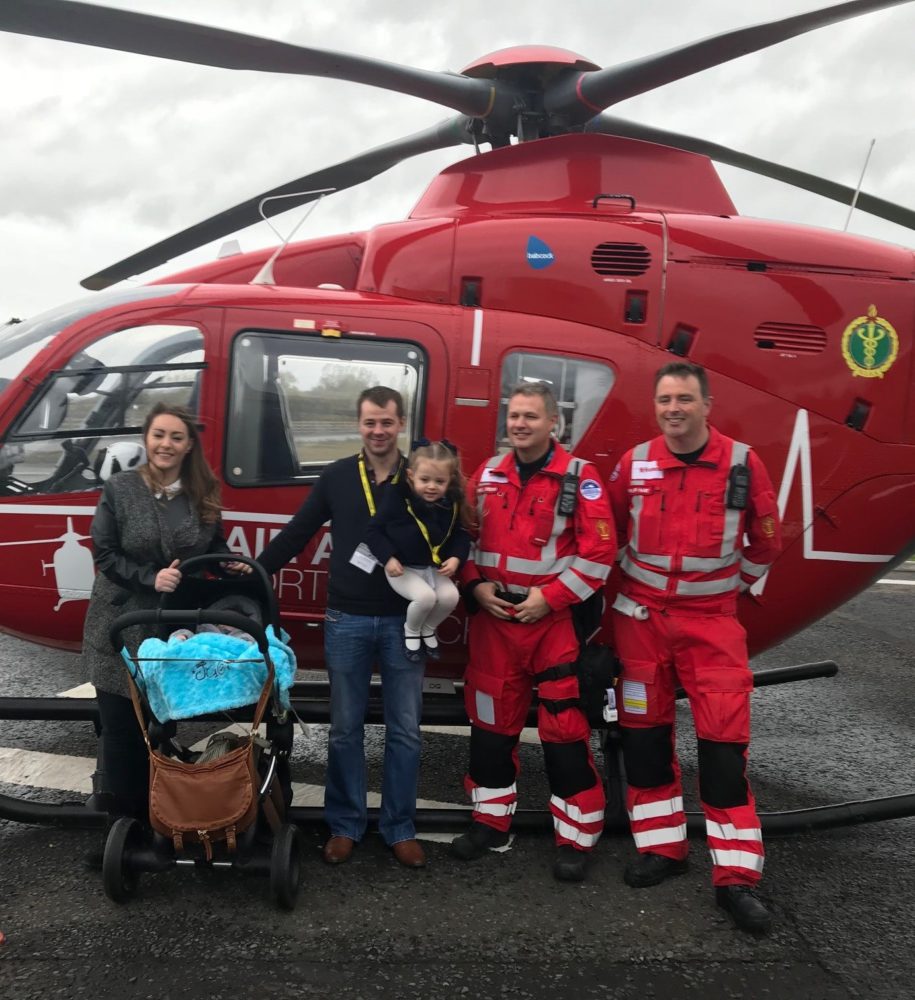 Nathan Hawthorne with his wife and two children visiting the Air Ambulance NI operational base.

A Keady farmer who suffered serious injuries after he was attacked by a bull two years ago has paid a visit to the Air Ambulance NI to thank the paramedics who came to his aid.

Nathan Hawthorne was bringing a cow and bull along a laneway near his farm when the bull suddenly turned to attack him.

He tried to remove himself from danger and run from the bull but unfortunately he was attacked directly in the chest by the animal.

The bull then pinned Nathan to the ground with his head and proceeded to try to crush his chest before forcing him through a barbed wire fence, causing severe lacerations to his back.

Even though the bull had broken several of Nathan’s ribs and caused a number of other injuries, he remained conscious and was able to get up and walk across the farm to raise the alarm via his mobile phone.

Emergency services – including the Air Ambulance NI team – were dispatched to the scene.

The HEMS team assessed Nathan and treated him at the scene before transporting him via helicopter to Craigavon Area Hospital where he spent six days.

Nathan – speaking as he visited the HQ – said: “I’m so grateful that the Air Ambulance team were there and were able to start my care right then on the farm before I was transferred to the hospital for further intervention.”

Nathan’s was one of 178 call-outs which the Air Ambulance NI has made to the Armagh City, Banbridge and Craigavon Council area since the service started almost three years ago.

Throughout lockdown and despite most of us spending more time at home, trauma accidents and incidents continue.

The Air Ambulance NI is still needed on average one or two times daily.

And for the ABC Council area, the 178 call-outs equates to an average of just over five calls per month.

Air Ambulance NI is the local charity that provides the Helicopter Emergency Medical Service (HEMS) for Northern Ireland, together with its partners at the Northern Ireland Ambulance Service. The service brings urgent medical assistance to anywhere in the province, operating seven days a week for 12 hours per day.

Glenn O’Rorke, Operational Lead for the HEMS said, “The HEMS team have been tasked on 1487 occasions since inception less than three years ago. Your life can change in an instant, trauma is still here and will continue, despite lockdown and more limited activity in society.

“We encourage everyone not to take unnecessary risks, yet we realise accidents happen.  If that is the case and we are tasked, the Air Ambulance can reach anywhere in NI in approximately 25 minutes.”

“With your continued support our medics can fly and continue to provide specialist critical care at scene that can be the difference between life and death.

“Each day £5,500 is needed and like every charity, we are experiencing a massive reduction in fundraising. Yet we know your helicopter service inspires support and helps patients like Nathan regularly.

“If everyone does a little the air ambulance will be here now and for generations to come.”

One of the simplest ways to support the charity is by becoming a member of Club AANI.  Club AANI members donate monthly through direct debit, so it means once this is set up you are consistently supporting and are part of the journey.  Over 800 people so far have become members.  You can join at www.airambulanceni.org. or call the charity on 028 9262 2677.