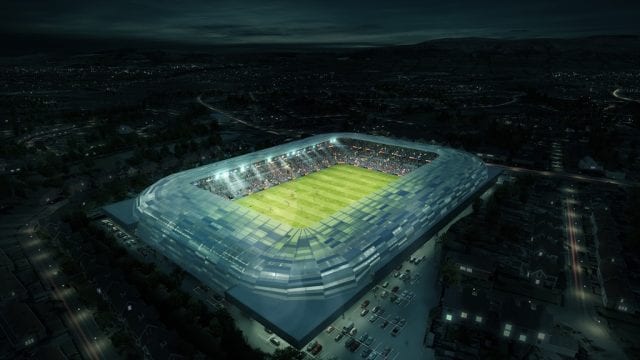 Plans for the redevelopment of Casement Park in Belfast have been unveiled by Ulster GAA today.

The new scheme plans to transform the disused ground with an enhanced atmosphere and iconic new stadium bowl, which will be used as part of Ireland’s 2023 Rugby World Cup bid.

The mixed use facility proposes a range of resources to advance the economic, cultural and heritage opportunities for the local community.

“In the new scheme we have reduced the scale, mass, size and capacity of the stadium whilst at the same time creating a first class atmosphere for GAA supporters through the bowl design and up-close spectator experience.”

Michael Hasson, Ulster GAA President, added: “GAA members, supporters as well as people across the local community are looking forward to an exciting new beginning for Antrim and a Provincial Stadium for Ulster.  We want to create a positive sporting legacy and iconic stadium that will be a beacon to inspire young GAA players throughout, West Belfast, Antrim and across Ulster.”

·         The ability to positively contribute to the local economy of West Belfast and further afield.