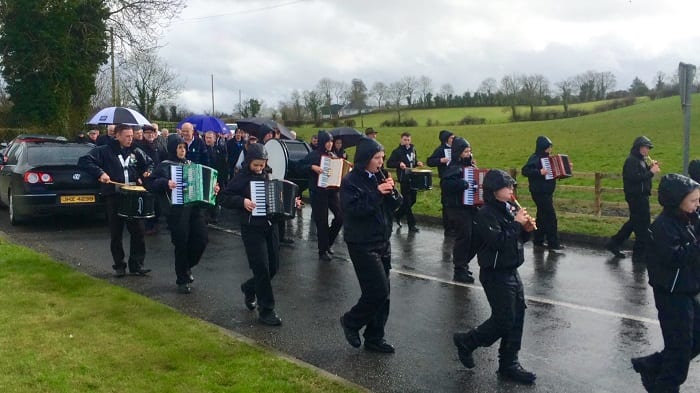 Despite threatening rain, hundreds of Republicans from the greater Ballymacnab area gathered on Easter Sunday afternoon to honour Ireland’s patriot dead and mark the centenary of the Easter Rising. Led by a Republican colour party, the McKelvey pipe band Ballymacnab and St Patrick’s youth band Cullyhanna, the parade made its way to the Republican plot in the local cemetery where a display featuring the seven signatories of the proclamation was positioned along the route.

Proceedings were chaired by Darkley Republican Liam Ó Manachain who welcomed people and acknowledged the contribution of local people who supported and assisted the struggle for Irish freedom over the years.

Liam also explained that the Easter Rising was a watershed in Irish history as a burning flame was established which continues to inspire young generations of Irish people. Following a decade of the rosary by Ronan Quinn in acknowledgement of all of Ireland’s patriot dead, wreaths were laid on behalf of the Republican Movement, Sinn Féin, the McKelvey pipe band, St Patrick’s youth band and the McVerry/McElvanna Cumann, Keady.

Poignantly, the Republican Movement’s wreath was laid by veteran Republican and gaol escapee Cathal McQuade was was active during the IRA’s border campaign, imprisoned in the Curragh prison camp in the 1950s and later in Long Kesh during the 1970s. The proclamation was then read by Eilish McClelland and the roll of honour by Mickey Savage.

Short accounts of all seven signatories of the proclamation were then read by local Sinn Féin Councillors Garath Keating and Darren McNally.

The guest speaker at the commemoration was Lifelong Republican activist and long-serving Louth Sinn Féin Councillor Pearse McGeough. Pearse explained that Republicans from the Ballymacnab area, including his own grandfather Henry McKenna were so inspired by the events of 1916, that they established an IRA unit in the area shortly after the rising.

This unit quickly began to increase in numbers, taking part in some of the most daring IRA operations during the Tan war including the attack on Newtownhamilton barracks in 1920. Pearse outlined that successive generations of Republicans had remained steadfast to the struggle for liberation and that the goal of a United Ireland was now more achievable than at any previous time in our history.

A plaque marking the centenary of the 1916 Easter Rising was then unveiled by Micéal Caraher and Shane McClelland, nephews of South Armagh Volunteers Fergal Caraher and Raymond McCreesh. A limited edition handwritten print of the 1916 proclamation by Belfast Republican Padraic Wilson was then presented to both of the bands by Cathal Boylan in recognition of their ongoing contribution to the annual Easter parade and commemoration.

Following the adjournment of proceedings, the bands led people back to Ballymacnab hall for the playing of the National Anthem. The Ballymacnab Easter Commemoration Committee would like to thank all those who supported and helped to make this year’s event a fitting tribute.