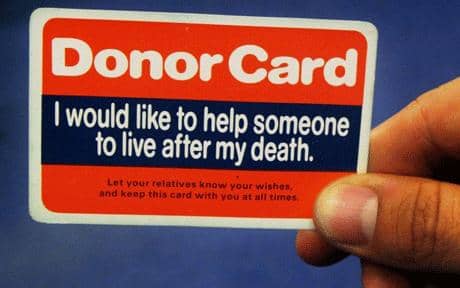 BOOSTING organ donation rates is the key to reducing the number of people who die waiting on a transplant, Health Minister Edwin Poots said today.

Mr Poots estimated that 200 people are currently waiting on a transplant in Northern Ireland and around 15 people die each year before a suitable donor is found.

Speaking during a round table policy discussion in Parliament Buildings on organ donation, organised by the British Medical Association (BMA NI), the Lagan Valley MLA called for people to sign up to the organ donor register.

“Although the organ donor register is increasing, more still needs to be done,” he said.

“Currently around 30% of our population has registered and we must continue working hard to encourage more people to join. There also needs to be a strong message put out that people must discuss their wishes with their family and friends.”

The event provided an opportunity for the Minister to hear at first hand the thoughts of the BMA NI and other invited guests on the future for organ donation in Northern Ireland. He also took the opportunity to update those gathered on the recently-announced consultation on an opt-out system for Northern Ireland.

Former GAA player Joe Brolly and fellow coach Shane Finnegan were in attendance to show their support. In November, Mr Brolly donated a kidney to Mr Finnegan but doctors removed it after nine days due to medical complications.

Some European countries, including Sweden, operate an ‘opt-out’ system whereby organs are automatically donated unless the person has requested otherwise and Mr Poots admitted he is looking at the possibility of introducing it here.

“No one could have failed to notice all the coverage that organ donation has received in the press in recent times – we are all well aware of the harrowing stories of those desperately in need of organs,” he added.

“As there is sustained interest in organ donation, I recently announced that I intended to consult on attitudes towards an opt-out system for Northern Ireland and today’s discussion has been very useful in opening up that debate.

“I intend to announce in the near future the plans to take forward the consultation exercise; in the meantime, I would urge all those who have not already done so to join the organ donor register and to discuss their wishes with their family and friends.”

Information on how to register to become an organ donor can be found on http://www.nidirect.gov.uk.