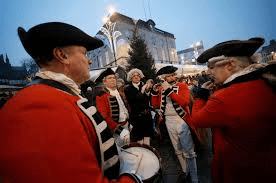 Consideration is to be given to extending Georgian Day in Armagh this year to a Georgian Weekend, Armagh I can reveal.

It comes after comments that lessons needed to be learned from problems arising from 2013’s big day out.

There were criticisms, praise and suggestions for improvement when an Armagh City and District Council scrutiny committee considered an interim report on the November 30 festive attraction.

It is expected the possibility of extending the event from the Friday, with late night shopping in Armagh, will be looked at.

Councillors at their recent meeting were told of the excellent newspaper coverage by the Newsletter and Belfast Telegraph, and the positive PR secured for Armagh from this event.

SF Councillor Cathy Rafferty referred to a City Centre Management Committee meeting held earlier that evening and acknowledged that a very good briefing in relation to Georgian Day had been provided to traders.

She said while it had been excellent to see 30,000 people coming to the city, there were issues that needed to be addressed. She suggested that perhaps the cost of stalls should be reduced and more stalls provided in other areas of the city.

Councillor Rafferty also referred to Gingerbread Alley, which had been moved to the Market Place Theatre, but which she said should be moved back to EuroSpar, where it had been a terrific success the previous year and had brought activity to this area of Armagh.

Councillor Rafferty also said that the issue of getting other traders involved needed to be addressed. She referred to the Shambles Yard and said it was vital that some sort of event was held there on Georgian Day itself rather than before or after it. There was a need for stalls to be planned well in advance and said that the ‘jam’ of stalls that had occurred between Sainsbury’s and Emerson’s could not be allowed to happen again.

Councillor Rafferty referred to a suggestion made at the CCMC meeting that perhaps the Chair and Vice Chair of that body could sit on the proposed Events Scrutiny Panel to be established, to bring forward ideas from the traders.

Council Clerk and Chief Executive John Briggs said Councillor Rafferty had brought up a lot of very valid issues which needed to be looked at for next year.

He suggested that perhaps they were trying to do too much in one day, but said that it was great that the event had become such a phenomenal success after 10 years.

DUP Councillor Freda Donnelly said the key to the success of Georgian Day was in the forward planning and proposals needed to be brought forward at a much earlier stage.  Personally, she also felt that they should be looking at more authentic goods for stalls, such as baked potatoes and roasted chestnuts, and that stalls should be expanded to other areas of the city, such as Dobbin Street, Barrack Street and the Mall.

Councillor Donnelly referred to a complaint received by Armagh Council from someone who had been unable to take a carriage ride because it was fully booked, and suggested that they should look at the possibility of getting in more providers of this type of service because it was obviously popular.

Mr Briggs said he had been contacted by traders in Barrack Street and had offered to meet with them to discuss the issues, and would continue to work with them.

SF Councillor Roy McCartney agreed with all that had been said and added that there was no doubt that the event overall had been a tremendous success. He said while stall holders paid for their stalls and wanted to be close to the City Centre, the Council should not be allowing them to dictate as to where their stalls were located. He referred to some complaints received about stewards at the event and said there was a need for a commonsense approach to be adopted.

With regard to the light show, Councillor McCartney said that the entrance point was also the exit point which had created a jam of people leaving one show and others trying to enter for the next. He suggested that perhaps consideration could be given to some type of pre-book coloured ticket system for the light shows.

Overall he agreed that there were lessons to be learnt and improvements that could be made.

SDLP Councillor Sharon Haughey-Grimley said that the fundamental problem was the sheer number of people in one small area, so it made sense to expand it and space it out better.  She said it was getting to the stage where people were going to be put off attending the event because of the crowds.

Councillor Haughey-Grimley referred to complaints received from traders within the EuroSpar shopping complex regarding the lack of Christmas lighting, etc. in the complex, and whilst acknowledging that this was not the Council’s responsibility, she suggested that it could be raised with the owners on behalf of the traders there.

She also agreed with Councillor Donnelly that the Georgian Day event needed to be a unique experience.

Councillor Speers referred to the sheer difficulty of managing a crowd of up to 30,000 people. With regard to some of the issues raised, he suggested that there was an opportunity to create a build-up to Georgian Day so that it was a weekend event rather than just one day.

He felt that there was a great opportunity to develop something unique for the area and said that the event was receiving provincial attention in the press and they should be grateful for this.

In response, the Strategic Director said it was important to remember the rate at which the Georgian Day event had grown and expanded over the past 10 years.  She said that the key to the success of the event was its authenticity and experiential offering, and that it would be very important to retain these elements going forward

Councillor Rafferty agreed with Councillor Speers’ suggestion that the event could be expanded, perhaps starting on the Friday with late night shopping, etc.

With regard to the involvement of traders, she said that quite a number of traders had taken stalls at the event, but she referred to one trader from Scotch Street who had taken a stall out on to the footpath and blocked it which needed to be prevented in future.