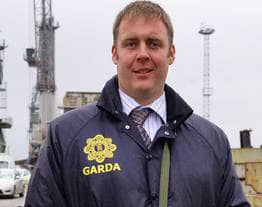 Officers investigating the murder of Detective Adrian Donohoe say they want to trace the driver of a white HGV.

It is believed the gang involved in the detective’s murder, outside a post office in Lordship, county Louth may have been seen beside the lorry on the day of the killing on January, 25, 2013.

The gang is also believed to have fled immediately across the border to Northern Ireland on the night of the shooting.

An hour after the incident in Lordship, at around 10.30pm on the Friday night, a car matching the description of that used for the robbery and murder was found abandoned just outside Keady, county Armagh.

Detectives have now appealed for information regarding the white HGV parked on Shean Road in Forkhill at about 9.45pm on Friday, January 25.

They said they also want to trace anyone involved in the recovery of the lorry or servicing it.

Gardai also want to speak to anyone who was travelling on the Shean Road in the Forkhill that night.

Anyone with information is being asked to contact gardai in Dundalk.

To date, no-one has been arrested or charged over his murder.