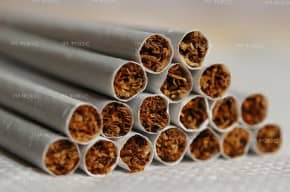 A SOUTH Armagh man, who financed the setting up of a furniture import business as a front to smuggle seven million counterfeit cigarettes into the UK, was sentenced to four years in jail at London’s Old Bailey today (Friday).

Brendan Murphy, from Tullyah Road in Whitecross, was arrested by HM Revenue and Customs (HMRC) after he was caught unloading the cigarettes from a 40 ft trailer at a warehouse in Deptford in December 2011.

His arrest was part of an ongoing HMRC investigation into a company called Vital Trade Ltd, a furniture import business for which Murphy was a financier.

HMRC believes that the business was set up purely as a front for Vital Trade’s plans to smuggle millions of counterfeit cigarettes into the UK.

HMRC’s John Pointing, Assistant Director of Criminal Investigation, said: “This criminal plot attempted to deprive the nation’s public services of nearly £2 million in revenue. We will not stop in our pursuit to bring those involved in this type of criminal activity before the courts.

“Tobacco smuggling is organised crime on a global scale. It encourages and supports criminality within our communities, robbing taxpayers of millions each year in unpaid duty and VAT.”

Two others, Justin McCormack and Catherine Joyce Henry, were also arrested in December 2011, but have since absconded and are believed to have returned to live in the Republic of Ireland.

Anyone with any information about these people has been asked by HMRC to call the Customs Hotline on 0800 59 5000.