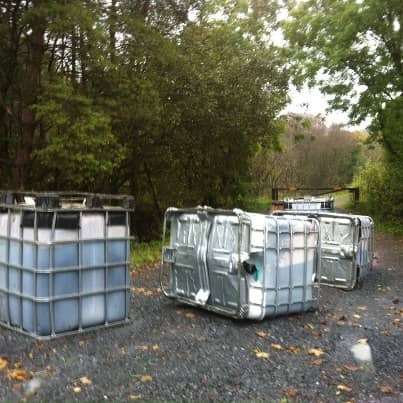 CRIMINALS have once again targeted Carnagh forest in their bid to dispose of hazardous fuel waste.

Four containers were left strewn at the roadside just outside Keady in what was the early hours of Thursday morning.

There has been widespread anger and condemnation for the act and locals are calling on major action being taken now.

Many took to the social network Facebook to vent their frustrations.

One woman said “it’s about time something was done to try and catch these people in the act, its happening too often and they know they’re getting away it,” while one man said that eventually the waste will find its way into the water system.

Meanwhile, two diesel laundering plants, together capable of producing over 15 million litres of illicit fuel a year, have been were discovered in two separate locations across the county.

Customs and police officers uncovered a laundering plant hidden in a shed at a house in Cullyhanna on Wednesday.

In a separate search, a second plant was found beside a house in Middletown.

Three tonnes of toxic waste and 1,000 litres of illicit fuel were discovered at the two sites.

A tanker, pumps and equipment were seized.

Officers also seized computers from the house in Cullyhanna.

“These operations typically generate tonnes of toxic waste, which is often dumped indiscriminately in the countryside.

“So as taxpayers and local ratepayers, not only are we missing out on the tax, which is going into the pockets of the criminals, we are also paying the substantial clean up and disposal costs.”