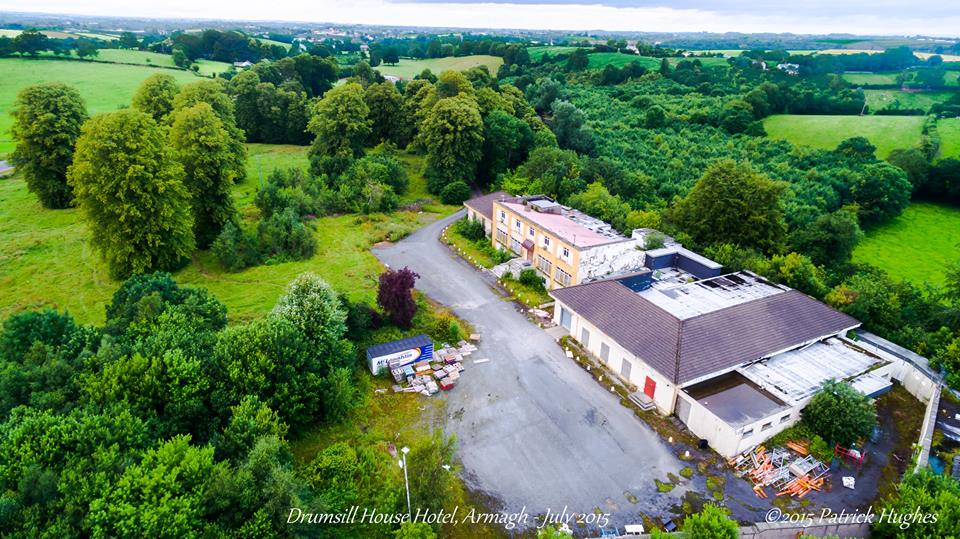 The site of the former Drumsill House Hotel is to be redeveloped as part of a major project which is expected to create some 50 new jobs, Armagh I can exclusively reveal.

More than a decade after plans were first submitted, Armagh City, Banbridge and Craigavon Borough Council will this week give a final approval which will meet the needs of the business and allow work to proceed.

An application, submitted in the name of Silverwood Property Development Ltd, will see the huge Moy Road site housing a distribution warehouse and office accommodation.

The site in question also takes in the area of the former Met night club, adjacent to the old hotel.

The development would also create work in the local construction industry.

The premises will be for use by Bunzl McLaughlin, the leading supplier of non-food catering and cleaning supplies to businesses across Ireland, providing services to the hospitality, healthcare, leisure, industry, facilities management and public sectors – including education, local councils and Civil Service.

The ambitious application for the Moy Road site will also include landscaping and access.

It will be formally approved at a meeting of the council’ planning and regulatory services committee which will take place in Banbridge on Wednesday night.

This is the fourth time that an application for this development has gone forward.

The first was in 2004 and subsequent proposals were brought forward in 2008 and 2011. These have been approved and the most recent remains ‘live’ until next year.

But an additional application was lodged to increase the size of the development to meet the industry-leading company’s needs. The project will be allowed to proceed and this is the first time it has come forward since the transfer of planning powers to local government in April.

There had been fears that the business might have to look beyond Armagh to accommodate its needs if it had not been able to proceed.

On this occasion there were no objections raised by public or statutory bodies.

The building is to be mainly finished with silver coloured metal cladding to the upper walls and roof with concrete block lower walls and areas of render on the office building walls.

It is anticipated that the scheme will facilitate the creation of at least 50 new jobs once completed.

The applicant previously demonstrated that there were no suitable sites in Armagh or surrounding area for this development and the proposal was described to council as “a business contributing substantially to the local economy which the applicant wished to keep in the vicinity of Armagh City”.

It has also been earlier shown that, in order to expand the business, the current site at Cathedral Road was too restricted and there was no opportunity to enlarge it. Most traffic to and from the existing site has to “negotiate a difficult junction at English Street as well as narrow, busy town centre streets. It was also demonstrated that a suitable site was not available within the development limit”.

Given the existing approvals on the site for a distribution warehouse with offices – and that the most recent approval remains live until October next year – it was considered that the current proposal meets requirements.

The agent said this was crucial in order to support the premises’ role as an HQ building for Bunzl, a multi-national distribution and outsourcing company.

The administration block will provide staff welfare facilities – such as canteen and restrooms – with meeting rooms/board rooms and general office accommodation for the various company departments.

Council has been told: “The landscape details submitted indicate retention of a major proportion of the existing trees and vegetation on the site and substantial new planning, all of which would minimise visual impact.

The planning officer – in recommending that the development be approved – has reported to council: “The proposed site is of sufficient size to accommodate the proposal and is well screened by mature vegetation with direct access to a main arterial route.

“It is in the rural area but has a long history of commercial use in the form of a hotel with a former night club immediately adjacent.

“Considerable weight was given to the economic considerations of the case, the unavailability of alternative sites in the locality and the benefits of taking the associated traffic off the town centre streets.

It is considered that the proposal complies with the current planning policy.”

A number of conditions were laid down in relation to the approval.

One is that the external lighting shall be angled, directed or cowled to prevent light spillage in an upward direction or cause nuisance outside the site. In addition, all lighting will be timer controlled to avoid night time periods, with the exception of motion activated security lighting.

Photograph by Patrick Hughes/Ireland From Above