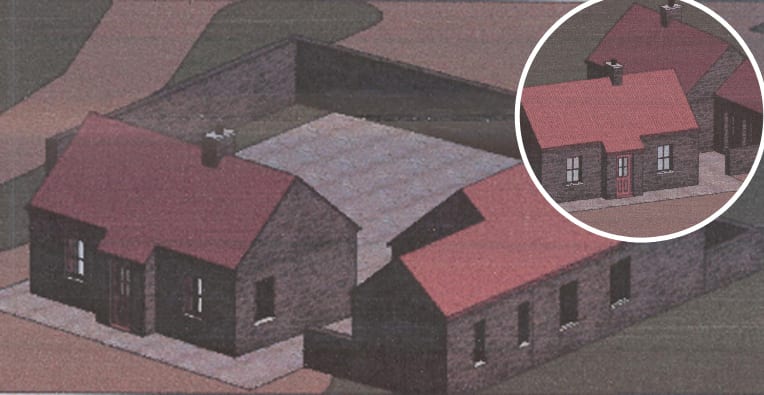 A new and unique tourist facility in the shadow of the majestic Gullion could soon become a reality.

This is not camping – it’s glamping – and the hand-crafted self-catering accommodation would be a fantastic addition to the area.

Which is why a husband and wife team could soon be giving visitors the chance to enjoy all that the Ring of Gullion Area of Outstanding Natural Beauty – but with a distinct difference.

And from the homestead, in conjunction with Matthews Coaches and the Cross Square Hotel, the Carragher-Donnelly residence also hosts cookery demonstrations of traditional Irish cooking and baking with a backdrop of Slieve Gullion.

The couple are now seeking planning approval to extend the offering at their rural tourism enterprise.

A planning application has been submitted to Newry, Mourne and Down District Council to provide four ‘glamping pods’, each hand-crafted from timber and capable of sleeping two adults.

The proposal includes the provosion of two shower/toilet enclosures, and the reuse of outbuildings would allow for communal kitchen and laundry facilities, as well as a games room, storage, office and toilets.

There would be car parking and cycle parking provided for visitors.

A planning statement has been submitted with the proposals which are described as representing a “significant local investment”.

It also confirms funding granted by the Department of Agriculture and Rural Development for the creation of a broadleaf native woodland. This involves the planting of 22,000 trees on a farm holding. Indeed, planting has already started on something which has been described as a “significant attraction in its own right”.

The ‘glamping’ pods are – crafted in County Kerry – are described as being “beautifully and aesthetically pleasing” and represent “tasteful and bespoke self-catering accommodation”.

The proposal, according to the planning statement submitted, is stated to be “entirely sensitive” to the Ring of Gullion AONB.

The statement adds: “Care has been taken to utilise and retain redundant rural buildings within the landscape and to use natural timbers in the construction of the glamping pods.

“The siting of the proposal makes use of the existing natural vegetation boundaries which are to be augmented and supplemented with native species. The proposal will sit within a native broadleaf woodland, the planting work for which is currently underway and is grant funded by DARD.”

In compiling the statement and the accompanying documents, the agent and applicant are asking that the proposals be allocated to a planning officer “without delay”, that they be “assessed as a matter of urgency” in the hope that the development can be open in time for the peak tourism season in the coming months.

The provision of the accommodation, it is argued, would add to what is on offer in the area.

The planning statement adds: “Such accommodation would not only enhance, compliment and bolster the existing tourism enterprise, but also create positive spin off benefits, such as an increase in tourism spend within the Ring of Gullion.

“The new self-catering accommodation linked to the existing rural tourism enterprise will create economic and commercial synergies with the wider Ring of Gullion attractions by enhancing its usage, economic viability and attractiveness to tourists.

“In turn this will support the wider tourism initiative of the Ring of Gullion area.”