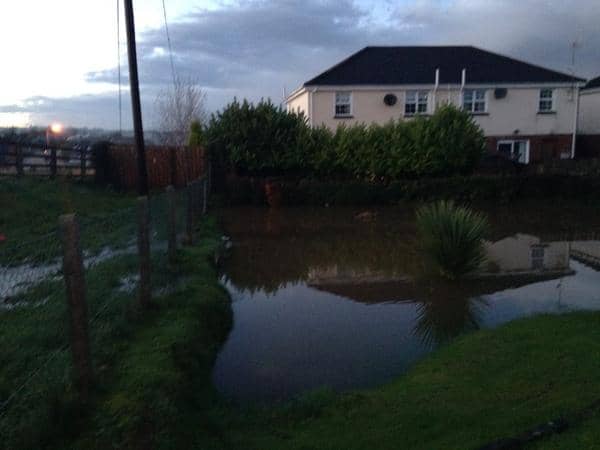 The emergency scheme for householders hit by flooding has been activated tonight (Thursday) after a day of misery across the Province.

Newry was particularly badly hit, with motorists being advised to avoid the city.

The flooding was widespread across Northern Ireland and police have been advising motorists to exercise extreme caution during what has been the worst such conditions witnessed in many months.

In the interests of public safety, the PSNI have warned motorists and pedestrians not to try and move through flood waters.

Chief Inspector Pat Foy said it was hard to tell how deep the waters were and there are reports of manhole covers having been dislodged.

Full details of roads closed as a result of the floods can be found at www.trafficwatchni.com

Further heavy rain is expected to move in from the north overnight and will be accompanied with strong winds, potentially gale force.

In some areas today homes and businesses were badly hit and found themselves under water, such as in this scene in South Armagh.

The PSNI in Newry, posting via Facebook, revealed officers had to wade through water to rescue a wedding dress from the muddy waters ahead of the grateful bride’s big day tomorrow!

It is perhaps too early to see the overall extent of the situation.

In Armagh, the Callan river, as usual, has burst its banks and there is considerable flooding in the area of Ballycrummy and below Mullacreevie. We are also receiving reports of serious flooding in the area of Tandragee and outside Loughgall, but it is impossible to pinpoint all of the areas which have been affected at this time.

“I am conscious of the incidents of flooding in Belfast and Newry this evening and of the threat of further heavy rainfall to come,” the Minister said tonight.

“Individual householders who have suffered severe inconvenience can claim from their local council, £1,000 payment as an offer of practical assistance.

“The payment is meant to ensure that homes are made habitable as quickly as possible. It is not a compensation payment.”

He made his comments after huge areas throughout Newry and right across Armagh were affected by rising waters.

“The flooding across many parts of Newry and Armagh has caused serious hardship to people and  traffic chaos, as driving conditions have become extremely dangerous.

“I would urge people to travel only if necessary and those concerned about flooding should call the 24 hour helpline on 0300 2000 100.”

On the broader issue of tackling what he says is now a common problem, Mr Brady went on: “Regional Development Minister Danny Kennedy needs to manage his department’s budget better to ensure he has the resources to prevent flooding and to deal with it when it does occur.

“He has a responsibility to ensure that gullies are cleaned and drains are kept free from leaves.”

For those who have found their homes and belongings hit by the flooding, they should contact the local council as soon as possible.

The council will arrange for an urgent inspection of the property.

Minister Durkan said: “If the council decides that your claim is eligible, you will receive your payment within a matter of days.

“In addition, your council can also offer a range of practical help and guidance, including collection, retention and disposal of damaged household contents, assistance with arrangements to clean up your home and garden, and also by providing de-humidifiers to dry out affected homes.

“My Department will reimburse councils for the £1,000 payments to individual householders, and for the direct and indirect costs of providing practical assistance and advice.

“I and my Executive colleagues want to help those most severely affected to get back to normal as quickly as possible and to assist them in ensuring their homes are habitable.

“Working with and through councils, my aim is to ensure that practical and financial help is delivered to those most in need as early as possible. I would also urge people to keep an eye out for elderly and vulnerable neighbours.”

Newry and Mourne Councillor Charlie Casey has said that overloaded storm drains in Bridge Street in Newry – and also in the Carnagat area – have been the main cause of serious flooding problems, urging that action be taken now to ensure this does not happen again.

“It’s very simple – these huge deluges of rain are now a common and expected weather pattern and, rather than react to the flooding emergency when it happens, Roads Service, Rivers  Agency and Water Service need to take action to ensure that these storm drains can cope,” said the Newry City Councillor.
Meanwhile, Mayor of Newry & Mourne Councillor Dáire Hughes confirmed that council staff were on the ground to support Roads Service and Water Service staff if needed.
“Our council staff have opened the locks gate and we have constant updates on our Facebook page,” said the Mayor, who has been out on the ground visiting homes and businesses caught up in the flooding.
Newry City Sinn Féin Councillor Valerie Harte  has commended Roads Service and Water Service staff and the Emergency Services whom, she said, had been “working flat to the mat” throughout the day.
She added: “The priority at the minute is to respond to flooding reports and to try to make all roads as safe as possible. However, there has to not only be a serious discussion about the flooding situation, but a plan of action as to how best as practicably possible address it.”

Picture of flooding in South Armagh this evening by Daire Hughes, via Twitter