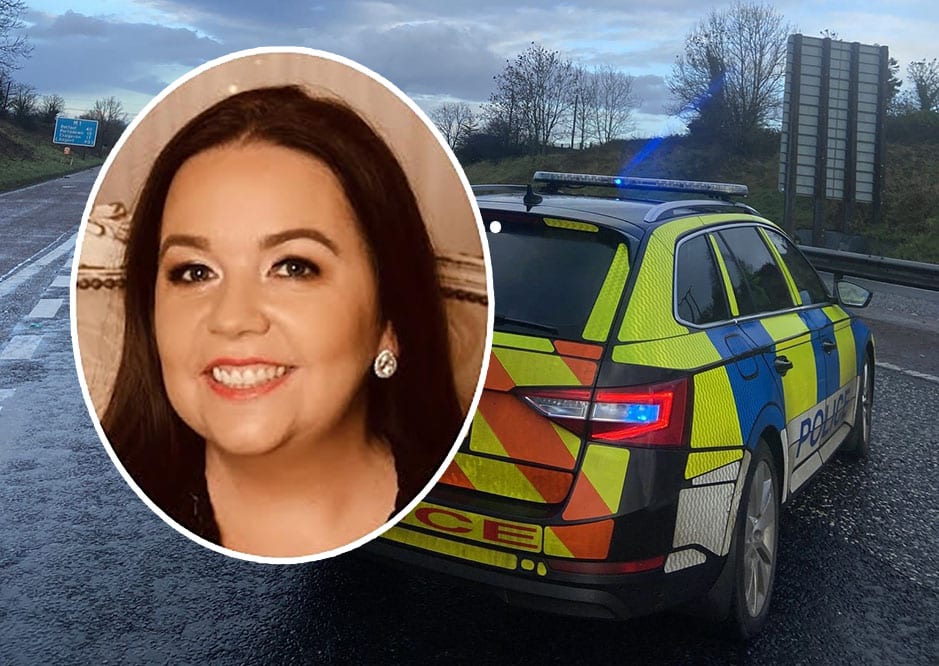 A mother-of-two who died in a collision on the M1 near Dungannon will be laid to rest on Saturday morning.

Imelda Quinn, from Galbally, died following an accident between junction 15 at Dungannon and junction 14 at Tamnamore on the motorway on Boxing Day.

A funeral notice described Imelda as the deeply loved wife of Gavin, most cherished mother to Nina and Norah, dearly beloved daughter of Cormac and Anne, treasured sister of Fergal, Angela (Morgan) and Cormac Óg, daughter-in-law of Margaret and TP, and sister in-law of Mari, Colin, Seline, Regina, Denise and the late Declan R.I.P.

Imelda will be reposing at her parents home, 38 Reclain Road, Galbally BT70 3BR from 2pm today (Thursday) until removal on Saturday morning for 12noon Requiem Mass in St John’s Church, interment afterwards in the adjoining cemetery.

Imelda was a founding member of the CannyMan Community Arts project in Galbally.

Paying tribute on social media, they said “our hearts are broken with the devastating news about the sudden passing of our dear and loyal friend and trustee, Imelda”.

“It is difficult to find words to articulate the incredible loss, grief and sorrow felt at this time.

“Imelda was a founding member of CannyMan Community Arts. Coming from a family steeped in music and arts and with an abundance of talent, Imelda had the foresight to create an organisation that would celebrate the arts and provide opportunities to showcase talent within the Galbally community.

“Imelda was driven and determined to reach high standards and was always to the fore in all our biggest events.

“Imelda never shirked responsibility and led from the front, setting an example to everyone and inspiring those around her.

“Imelda was incredibly passionate about her community and from a very young age had selflessly contributed her time to make a positive contribution and improve the lives of others. This was not surprising given the example set by her mother, Ann, and sister, Angela, who both have given decades of voluntary service to community life.

“Imelda always embraced responsibility and was a key figure in Galbally Youth Club for many years. Without Imelda, we would not have the range and quality of provision for young people that we now take for granted.

“Imelda has made an indelible mark on her community in her short life. We will never forget what Imelda has contributed to our organisation and to the wider community. But it is Imelda’s friendship, love and unwavering loyalty that we will remember with great fondness. Nothing will ever take away our memories of a true friend.

“We extend our arms around the Mc Donnell, Quinn and Morgan family at this difficult time. May they take comfort in knowing that someone so special as Imelda will never be forgotten. Ar dheis Dé go raibh a hanam dílis.”