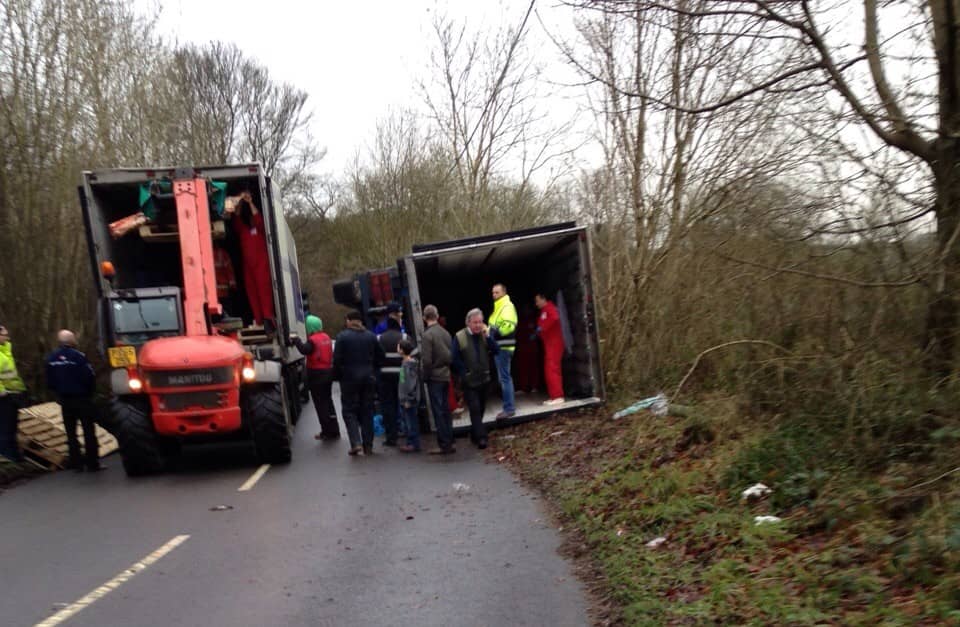 A driver had a very lucky escape after the lorry he was in overturned just outside Darkley village in county Armagh.

The incident, on the main Keady to Newtownhamilton Road, happened around 6.30am this morning (Wednesday) with police closing the road between Annvale Road and Mountain Road.

Sources at the scene of the accident said a tree smashed through the windshield of a Derry Refrigerator HGV, missing the driver by inches.

One source at the scene, speaking to Armagh I, said: “The police have now left the scene and there are no diversion signs in place which is catching a lot of people out.

“There is one Road Closed sign up from what I can see, but drivers are being turned away by those who should have their main focus on removing the lorry. There may be diversions in place but I’ve had to tell people the best route to get around the accident.”

He added: “This is a particularly bad, winding stretch of road and only for the crash barriers in place here, the driver was away down an embankment that is at least 100ft. He’s had a lucky one there.

“I hope he is okay but it looked like a bad one.”

A Northern Ireland Fire and Rescue Service spokesman said: “The driver of an articulated lorry which had overturned on the Darkley Road outside Keady in South Armagh was heavily trapped when crews arrived.

“Cutting gear, two short extension ladders, a long board and manual handling techniques were employed to release the casualty who was then transferred to hospital by ambulance.

The road is expected to remain closed for a number of hours yet.

Meanwhile, a 61-year-old man was removed from his Jeep by NIFRS and ambulance personnel after the vehicle had overturned off the Charlestown Road at Derrytrasna outside Lurgan.

He was then taken to hospital for treatment for minor injuries.