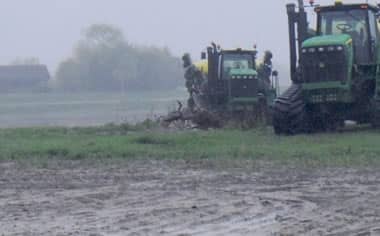 The Health and Safety Executive for Northern Ireland (HSENI), in its latest Annual Report, has confirmed that, while farm deaths reduced dramatically during 2013/14, farm safety continues to be the biggest challenge facing workplace health and safety in Northern Ireland.

Keith Morrison, HSENI Chief Executive, said “This year again saw HSENI focus much of our attention and resources on farm safety as a result of seeing an increasing trend in work-related farm fatalities in recent years. I am very grateful to the organisations which make up the HSENI led Farm Safety Partnership – they have made a major contribution towards raising awareness of the main farming health and safety issues and ensured that important messages and advice was distributed across the industry. The reduction in fatalities during 2013/14 is very encouraging but there is certainly no room for complacency, particularly given that this year to date has already sadly witnessed another four fatalities in agriculture. We must collectively continue to do all we can to ensure that farm deaths and accidents become a thing of the past.”

George Lucas, Chair of HSENI and the Farm Safety Partnership, added “The Partnership developed a second Farm Safety Action Plan and delivered a major multi-media farm safety campaign during the year, which was co-sponsored by the Department of Agriculture and Rural Development and supported by all partners. Staff from HSENI also undertook 1,000 advisory farm visits and delivered over 35 farm safety presentations to a wide range of audiences at events across Northern Ireland during the year. HSENI also delivered its farm safety programme to over 12,200 children in 93 rural primary schools, produced two new farm safety DVDs, ran a safety poster competition and produced and distributed an “Avoid harm on the farm” 2014 farm safety calendar to 38,500 families in rural areas.”

HSENI’s Annual Report also highlights the successful delivery of two important public awareness campaigns that focused on gas safety; one to raise awareness of carbon monoxide and a second to encourage the use of registered gas installers.

The report draws out the breadth and depth of the work HSENI undertakes which ranged from carrying out 6,350 inspections of workplaces to delivering 325 one-to-one mentoring visits to small businesses.

HSENI is responsible for overseeing health and safety in Northern Ireland’s highest risk industries such as construction, manufacturing, mining, quarrying, waste and agriculture. The report points to a continuing downward trend of all reportable work-related injuries with provisional figures for 2013/14 showing a fall of 4% on last year and down 17% since 2010/11. While major injuries were almost identical to last year, they were also down 17% since a five-year peak in 2010/11.

George Lucas said: “I see this continuing downward trend in all work-related injuries as a clear indicator that the range of approaches adopted by HSENI, in partnership with others such as colleagues in the District Councils, is proving successful. As Chairman of HSENI, I am proud of our record for the year. However, we will remain vigilant and continue to work hard to further reduce injury and ill health in the workplace.

“Every death or serious injury illustrates the need for employers and employees to be constantly focused on health and safety. Together, I believe we can make Northern Ireland’s workplaces even safer.”

Copies of the Report, including a ‘Key facts and figures’ summary, can be accessed via HSENI’s website at: http://www.hseni.gov.uk/hseni_annual_report_2014.pdf

He commented: “The latest figures show that deaths on farms have fallen from 11 in the previous year to four this year is welcoming but any death is a death to many.

“We must not be complacent and strive to bring this figure down to zero. I would like to commend the Minister Michelle O’Neill and her Department in being proactive in promoting safety on farms. I would appeal to everyone who either works or visits a farm to keep safety in mind so we can eliminate fatal accidents on farms.”

Meanwhile, his colleague, Newry & Armagh MLA Megan Fearon, commenting on the wider issue of work related fatalities, said: “The Health & Safety Executive annual report states that the number of work related deaths have fallen from 19 to 10.

“This is encouraging, but should not hide the grief and hurt that these fatalities cause. Safety in the workplace still remains a significant challenge for all.”