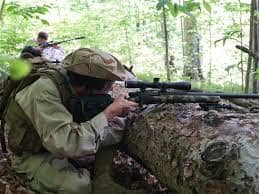 A disused quarry in Tandragee could be converted into a new adventure centre to accommodate the growing ‘airsoft’ sports craze, Armagh I can exclusively reveal.

DoE Planning Service officials have this week readvertised plans, submitted under the name of Delta1 Drop Zone, for the development.

Airsoft originated in  Japan in the early 1980s, the Japanese equivalent of the American paintball.

Both have grown rapidly over the years and are hugely popular forms of team-sports.

With airsoft, teams are given scenarios with objectives to complete. The idea is to eliminate members of the opposing team by means of realistic imitation firearms, which fire a 6mm BB at a safe distance.

It the application is approved, it would see the disused quarry, 130 metres north-west of 47 Cargans Road, Tandragee, developed into suitable game terrain.

Game Zone 1 would be an open field with a sloping gradient going down from the admin area. It has wind bushes and thorn brambles along the edge of the quarry which are approximately two to three metres in depth. It also has thick thorny bushes in places that would provide cover for players.

To prevent any danger to any personnel, there would be mine tape cordoning the border of the quarry in front of the bushes, along with the presence of at least two marshals to ensure that noone wanders off out of bounds.

Any other bushes, trees and branches in the remaining area will be trimmed back accordingly to prevent head or eye injury. Scaffold netting along the boundary of the neighbouring field will prevent stray pellets.

Game Zone 2 would be in the quarry itself and to the south along part of an old existing lane. The quarry is described as flat, with no risk of flooding; the walls are solid and do not appear to have any sign of lose material. There are some small boulders left from when it was last operational and at the rear, closer to the entrance of the admin area, there are signs of filling with clay and concrete.

The existing !ane is running along the natural boundary of the site with no obstacles, only trees to mark where it ends. Only roughly an acre of the lane would be used. Along the quarry’s floor edge there will be mine tape to indicate the boundary. Any sharp or hazardous boulders will be removed.

The quarry will be given a layer of dust to prevent any injury if participants fall. The existing lane’s boundary will be cordoned off accordingly and there will be scaffold netting to prevent any stray pellets entering the neighbouring field, just as in Zone 1.

If approved and the business proves viable, a Game zone 3 could be added in a wooded area.

Half mature and half plantation, it is approximately three acres and is currently used by the general public, mostly with their pets.

If it is decided to proceed with Game Zone 3, it would then be intended to provide a fenced boundary to prevent public access. Trees and bushes would be trimmed to prevent injury to head and face and again netting to prevent stray pellets.

Before any of the participants leave the admin area to begin in game play there would be a full brief on the dangers of the sport, the area, livestock and natural habitants.

The applicant has reassured Planning Service that strict rules would be set and anyone found breaking these would be escorted from the premises.

The facility would be fully covered by marshals to address any problems with participants and provide a good service. All will be trained at basic first aid and would be experienced in the sport.

It is also intended that no more than 15 people will be able to compete on site at any given time.

A decision on whether or not to approve the application is expected shortly.