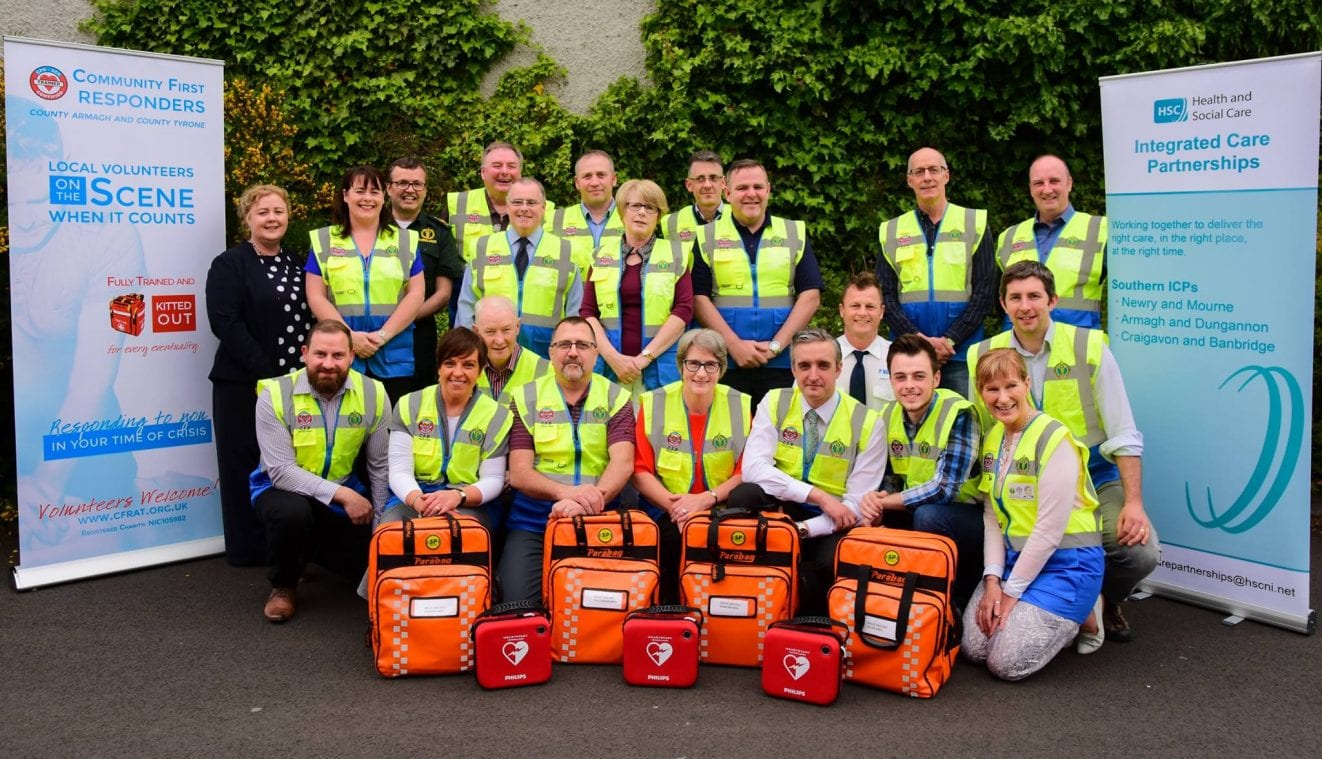 Twenty-five volunteers were presented with certificates to mark the completion of their training as the new Community First Responders scheme for Tyrone and Armagh was launched.

And former Fermanagh and South Tyrone MP Michelle Gildernew and Gail Allen, from Loughgall, spoke of the benefits of the service and shared just why they had signed up to become a volunteer responder.

The launch evening took place at the Ryandale Inn in Moy, when a large crowd gathered for the occasion on Friday evening. The Community First Responder Service Armagh and Tyrone (CFRAT) is a team of volunteers who share a vision of being able to render appropriate and effective CPR, defibrillation and first aid to casualties suffering from “immediately life-threatening, non-trauma conditions” in those critical ‘golden’ minutes while waiting for the ‘999’ Northern Ireland Ambulance Service (NIAS) paramedics to arrive at the scene.

A spokesperson explained: “When the Ambulance Service receives a ‘999’ call, the responders also get this notification and are able to arrive on scene within their local communities normally within minutes, and are able to offer that immediate first aid until paramedics arrive. “Being increasingly aware that NIAS’s target of eight minutes for a Category A immediately life threatening emergency, is perhaps an unrealistic expectation for rural communities, it was decided that, in order to improve the outcome for sudden cardiac arrest and other similar immediately life-threatening conditions, a local solution needed to be developed”

The evening opened with the Community First Responders’ Chairman, Mr Aidan Early, who shared the journey he and his committee have been on over the past two-and-a-half years.

There are twenty-five local volunteers who have successfully completed a five-week training programme and are signed off, equipped and ready to embark on their new volunteer first responder roles within the community. And the Community First Responders service Armagh & Tyrone was registered as a charity by the Charity Commission for Northern Ireland in January 2017 – a true recognition of the potential value this service can make to rural communities.

Mr Early’s address was followed by a recorded interview with a local cardiac arrest survivor, Mr Gerry McGurk, to set the scene, after which he was invited on stage to explain how the quick actions of two local first responders undoubtedly helped save his life and secure his return to good health after his sudden cardiac arrest on the morning of Thursday, October 13, last year, which coincidentally was National Re-Start a Heart day. The evening concluded with a short address given by Dr Ciaran McKenna, an Accident and Emergency Consultant and Committee member, who described the critical role CFRs have in the chain of survival.